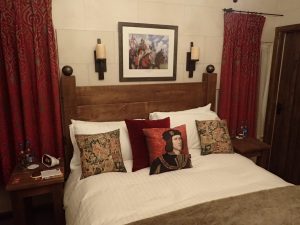 After a day exploring the Bosworth Battlefield Heritage Centre (and regretting that I’d missed the annual re-enactments of the battle in August) I rested my weary head in the splendid Richard III room at the Belmont Hotel.

My possibly misplaced fondness for dear old Richard meant that I slept peacefully under the watchful eye of his portrait instead of wondering when he might instructing his minions to “rumour it abroad that Narrelle, my fanciful biographer, is sick and like to die”. 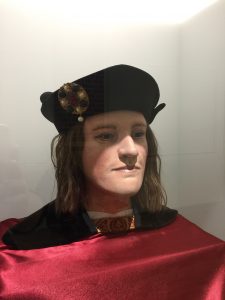 My first port of call was the King Richard III Visitor Centre. Its subtitle ‘Dynasty Death and Discovery’ is an excellent precis of what you’ll find within.

Temporary displays and an excellent audio-visual presentation give a good overview of the dynastic ructions which preceded Richard’s claiming of the throne from his brother’s boy Edward V, on the basis that Edward IV’s children were illegitimate.

(There is apparently evidence that Edward V, a known philanderer, had actually been married before he married Elizabeth Woodville, and that his first wife was still alive and in a nunnery. Parliament agreed with Richard and proclaimed the boys bastards.)

Understanding all this dynastic and even tribal argy bargy between the Yorks and the Lancasters is a bit of an ask, but vital to understanding what happened to bring Richard III to the throne and shortly thereafter to an ignominious burial. The KRIII centre does a good job of this before leading the visitor through displays that precis the key points of Richard’s reign and on to the challenges to his rule, the still unexplained disappearance of his disinherited nephews, and the final battle at Bosworth Field.

Upstairs, the displays look more at the popular opinion of Richard as influenced both by Shakespeare and the organisations, existing since the 19th century, which aimed to give a more balanced and realistic account of the man and his rule.

From there to the forensic account of the discovery of his body by members of the Ricardians, how his bones were identified and what was learned from his body.

The replica of his bones with material on the various wounds he received at Bosworth was what moved me the most. Accounts say he swore to live and die a King and not retreat from the field, and the blows he received, including an insulting post-death stabbing, seem to speak of courage, desperation and cruelty, all.

That curious sorrow for a long dead king struck me again when Tim and I went next to Leicester Cathedral, where we were guided around the church, as it was back in the day. Our guide spoke of the thousands who came to pay their respects to the lost king’s remains – spurred by curiosity as much as compassion, one supposes. The guide spoke in wonder of a woman who flew out from Moscow a day after seeing the thousands of people who lined up to see his coffin and its sumptuous funeral pall.

The simple alabaster tomb over his grave is elegantly carved and angled. “On the six sunny days we get in Leicester,” said our guide, “The sun comes through the stained glass window to reflect colours on his grave.”

The idea of that made me happy in a melancholy way. Richard’s body was bundled, naked, from the battlefield on the back of a horse. He was stabbed, post-mortem, and put on display to prove he was dead. He was buried hurriedly in a nearby Friary, so not completely without respect, but his head was bent, his hands were tied. His bones seemed small and sad in the pictures where they were found in situ. This simple, solemn, elegant grave feels like a kindness.

Although that Catholic and devout gentleman would no doubt spin in his elegant grave at thought of what that wicked Shakespearean version of him gets up to with Khan in my stories, I’m glad to see at last a more balanced and just view of his achievements and flaws, and the great shadow cast over both by those two lost boys.

Richard and I aren’t done with each other quite yet though. Our last Ricardian treat is the Blue Badge walking tour with our guide, Steve.

The walking tour shows other parts of Leicester’s history – it’s not all dead kings and surprise wins by the local football club. There are Roman ruins too. Richard’s history is also replete with mistaken historians and uncertainties about what really happened. Until relatively recently, Richard’s remains were thought to have been dug up and thrown into the river under the Bow Bridge. Near the bridge in question, three separate plaques refer to the changing understanding of that incorrect history. 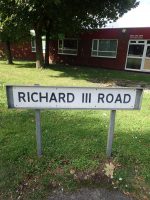 Steve’s tour gives a broader view of Leicester and elements of Richard’s story in the landscape where it took place. For all his wicked reputation, Richard is still viewed with some pride by the locals and streets are named for him as well as numerous pubs. People place white roses at the feet of his statue.

Grant me the carving of my name says the beautiful poem by Carol Ann Duffy, which was read at his reinterrment. Richard has been granted that, at least.

It’s an excellent way to consolidate everything I’ve learned so far while pacing the roads that, more or less, a King once rode and his body returned on.

Will the real King Richard please stand up

While Richard’s culpability in his nephew’s disappearance from the Tower and possible murder is still a subject of conjecture, elements of his character can be gleaned from his loyalty to King Edward IV, the legislation he passed during his short reign, and the few surviving letters he wrote.

His history has been written by those who defeated him (and whose ascension to the throne also relied on there being no legitimate living children of Edward V to stand in the way).  Most people’s memory of Richard  lodged in most people’s experience by William Shakespeare’s brilliant play.

However,  if not for Shakespeare’s deliciously villainous Richard, the world may not have cared so much when, against amazing odds, his body was discovered, mostly intact, over 500 years later underneath nondescript car park.

Richard’s head was pressed upward in its hastily dug grave, hands apparently bound, his spine twisted with scoliosis. It’s an image to invoke pity, whatever version of Richard you prefer. 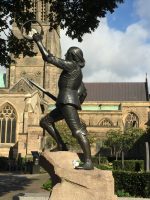 I carry in my head the vivid but fictional villainy of Shakespeare’s Richard. That image vies with the version I created for myself in fictions of a Richard and Khan redeemed not only by love but by the desire to be worthy of such love.

With these few days in Leicester, I also carry now the more balanced image of Richard: a man of his time. He was for many years a loyal brother, a courageous warrior, and a wise administrator who may have been responsible (through direct deed or indirectly through his authority over those who committed it) of the deaths of his nephews; or may have been made the scapegoat by those who had as much to gain from their deaths but less obvious opportunity to ensure them.

Unless further miracles of history occur to tell us, we’re left to choose the Richard we prefer. Our preference is probably determined by our own natures.

I prefer to believe in a man who tried to be fair and loyal but was compromised by circumstance: at worst, his own ambition, at best, a too-rigid belief in the rule of succession within the context that Edward’s children may well have been illegitimate and that made him the rightful heir, come hell or high water.

As Hamlet says of his father: “He was a man, take him for all in all, I shall not look upon his like again.”

Tim and I were guests of the Belmont Hotel and the King Richard III Visitor Centre in Leicester.

Whether or not you’re a Ricardian, you might enjoy my most recent books: Ravenfall, a paranormal thriller and gay romance set in contemporary London, and Near Miss, a short lesbian love story with yarnbombing, set in Melbourne. If het love/adventure stories are more your thing, check out my spy series, Secret Agents, Secret Lives.