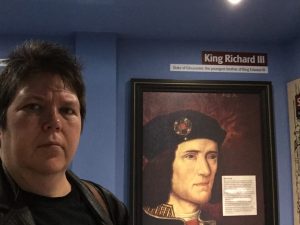 My relationship with Richard III is a bit rambling and has a few strange turns.

Like most people, what I knew of Richard Plantagenet, Duke of Gloucester, boiled down to one simple story: he was a wicked, hunchbacked man who stole the throne and murdered his innocent nephews, before being cut down in battle while calling out for a horse.

Shakespeare’s play – a fiction written for a Tudor audience and heavily influenced by histories written by Tudor accounts – obviously in turn influenced centuries of popular opinion on this game loser of the Wars of the Roses. 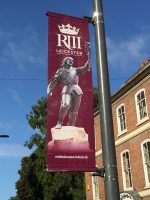 These days, I’m a much keener advocate of King Richard III as a misunderstood monarch. Books like The Maligned King have sown enough doubt about his complicity in the boys’ disappearance and made me a Ricardian!

My road to becoming one actually began with Shakespeare, though, and Martin Freeman’s brilliant 2014 turn as the cruel and broken man.  (More recently, Kate Mulvany’s portrayal was breathtaking too).

Hot on the heels of my second viewing of theTrafalgar Theatre production, my friend, fellow writer and co-conspirator, Wendy Fries, dared me to write a Richard III/Star Trek’s Khan fanfiction. After 30 seconds of denying such a thing was possible, I wrote the first of what turned out to be 14 stories of time travel, reincarnation, epic love and redemption.

I turned Shakespeare’s (and Freeman’s) mad, bad Richard into a whole new character – and my curiosity about the real Richard was revived. Not long after I’d written the stories, Richard’s recently rediscovered bones were reinterred at Leicester Cathedral. The pathos of the moment, combined my unexpected emotional investment in both the fictional and the real King, spurred me onto further reading.  I read Jospehine Tey’s The Daughter of Time and then, hungry for facts, Annette Carson’s The Maligned King.

All of which brings me to Leicester, and on the trail of the history of King Richard III, who was surely no saint, but who wasn’t a black-hearted villain either.

My first day in Leicester took us to the Bosworth Battlefield Heritage Centre. Between intermittent bursts of rain and sunshine, we were guided through the exhibition in the old farmhouse by the centre’s curator, Richard Knox.

The actual location of the battlefield wasn’t certain until relatively recently, when investigation located both the marsh in which Richard III’s horse got bogged and a wealth of medieval cannon balls. The Centre is located on what was the King’s encampment. From the nearby hill, a frame surmounted by Richard’s and Henry Tudor’s standards looks down on the valley where Richard met his end.

There’s a trick of imagination I indulge when visiting historical sites. I close my eyes and try to place myself across time, in the shoes of whoever once stood here. I have rested on the stones at the base of the Egyptian pyramids where workers once rested. I have placed my hands on Roman walls that were built by hands long gone to dust.

This day I stood on the earth that those long-gone medieval once stood on; suffered on; died on.

Here a man with a twisted spine – recently bereaved of both son and wife, an administrator with a concern for justice who was overhung with an appalling mistrust over the fate of his disinherited and vanished nephews – decided to live or die as a king of England.

Had he killed Henry instead of Henry’s standard bearer, the fate of English history may have been different.

The Bosworth Battlefield Heritage Centre takes no sides in the debate about Richard’s character. As Knox says during our tour, the job of the centre is to present the facts of the battle as far as they can be known. This includes presentations of the events leading to the battle, the kinds of weapons and armour used, the key events during the battle as understood from contemporaenous reports, and the aftermath. 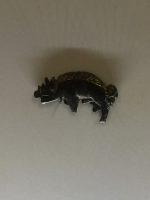 The centre also presents material from the various archaelogical researches that went into locating the actual battlefield. Among the items on display is a boar pin, which would have been worn by one of Richard’s household, who rallied to him in the fatal final moments of the battle. Where it was found, the historians surmise, is where he fell, fighting

These final hours of Richard’s short life and two-year reign are covered at the centre with objective thoroughness. If you’re interested in medieval history, whether or not you’re a Ricardian, it’s worth the considerabal trek out to see this thoughtful and intelligently presented battlefield site.

Next I’ll be writing about the discovery of Richard’s body under a Leicester car park and his reinterment at the cathedral.

Tim and I were guests of the Belmont Hotel and the Bosworth Battlefield Heritage Centre in Leicester.