The Lady Novelist is menaced by a cow on Dartmoor

May 29, 2018 Narrelle The Lady Novelist Travels 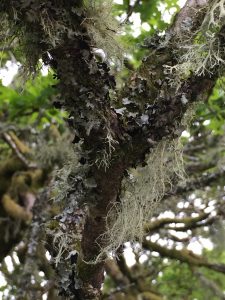 I’m on my travels once more – back to the UK where I’ve been doing a spot of research at the British Library, visiting a friend up in Kendal and doing the Beatrix Potter/Windemere Lake thing and now spending time with my talented friend, Janet Anderton, as we throw ideas around for a potential book collaboration or six in the future.

As part of our brainstorming for creative collaboration, Janet and I went on a road trip to Dartmoor. I’m also working on a story which is partly set on the moor and I wanted especially to see a strange little wood I’d read about in the middle of the national park.

Wistman’s Wood has a reputation for wizardry and occult happenings. Lying just to the east of West Dart River, the wood is an area of twisted oaks, shadows and lichen-covered boulders. It’s unlike any other place on the moor and is associated with legends of druids, demonic hunts and, I expect, many twisted ankles.

My little guide book said the walk to Wistman’s Wood from Two Bridges and back via a couple of tors was ‘undemanding’ and would take about two and a half hours. 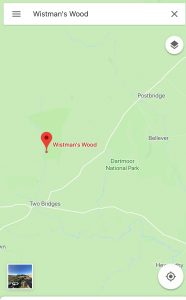 It mentioned that the walk shouldn’t be done in poor visibility. It mentioned the care that should be taken on some of the rougher, rock-strewn paths.

It did not mention cows.

As an Australian, I am used to certain activities while walking country paths. I have played the ‘is that a stick or a snake?’ game, and the ‘oh my god I’ve walked into a spider web, is there a spider in my hair?? oh god, oh god, get it off me, oh god‘ dance.

What I’m not used to is seeing three cows in the distance, standing in a solemn, unmoving row like they were about to ask Janet and I three riddles before we’d be allowed to climb the stile and enter the wood.  Three black cows that looked as big as Paul Bunyan’s blue ox but twice as mean, even from the opposite hill.

The weirdest thing was how they got smaller as we approached. In fact, by the time we got there, instead of the three of them towering over our heads and glaring judgementally at us, they were all about our shoulder height and two had lost interest. The third maintained an expression of sinister displeasure, but we tiptoed past, climbed the stile and made it without incident to Wistman’s Wood.

It was worth the clamber, the urgent need for a sneaky yet careful outdoor pee among the gorse bushes (reminiscent of that time in Canada with the bears) and the cow fright to sit on a boulder and look into that cool green light under the twisted oaks.  The intermittent call of a cuckoo and the chirps of songbirds punctated the hush. Down the hill, the West Dart burbled, and the complaints of querelous sheep filtered through to us.

The wood was eerie and compelling, but I was content to sit and watch rather than enter its rocky heart. I’m no mountain goat. Observation was enough to flesh out the story I currently have set in its interior.

In the shade of hill and oak, I also recorded a brief account of my response to Australia achieving marriage equality for the upcoming Irish of New York podcast. Afterwards, I shared and traded ideas with Janet (who among other things designed the IoNY logo) about how we might use the wood and it’s strange atmosphere to best effect for this book we hope to do together.

Rested from our travails, we decided to avoid the Scary Evil Eyed Cows by going to the top of the hill, skipping the tors and taking the grassy path back to the farmhouse at the start of our walk.

Hey, reader! Do you remember all those cartoons with big snorting bulls that puff steam from their nostrils and paw the earth with giant hoofs? Cos Janet and I sure do!

We were very forcefully reminded of all those animated characters tossed over fences by territorial bulls as we realised the big cow ahead of us wasn’t shrinking like the mysterious ones further down the hill. No.

THIS cow was enormous and getting larger.

THIS cow had a pair of balls that Janet described as ‘like two footballs in a pillow case’.

THIS cow was a big black bull, pawing at a dusty hollow in the hillside and tossing its horned head about in said hollow like it had personally affronted him.

He hadn’t even seen us yet.

Running was out of the question. I can’t. I’d be trampled to death and Janet, who is fleeter of foot than I, would have to sing epic songs of my heroic death so that my name lived on. She happily agreed that she would run like blazes and save herself if necessary.

Still, we thought. While people DO get killed by cows, we might be able to slide past this one if we played our cards right.

I immediately adopted the only strategy I knew, which was the one I was taught in Canada about Never Surprising A Bear. Janet opted for the Music Soothes the Savage Beast protocol. We didn’t want this bull – who was either enjoying a dust bath or rehearsing his badass Murder the Rambling Tourist moves – to be suprised. Nope nope nope nope.

We skirted well beyond its back legs. We walked slowly but steadily (do bulls chase running people the way dogs chase running cats? Who knew, but we were taking no chances).

The bull snorted into his dust bowl and ignored us.

We sang and hey-cowed and walked on until we couldn’t see the Bull of the Baskervilles any more.

The rest of our walk was without incident, but I did cast a backward glance from time to time, to ensure the Terrifying Cow hadn’t taken an interest. 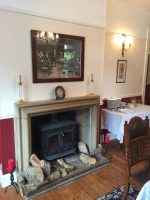 That night, the lovely Jane from our delightful B&B, Dartfordleigh, cheerfully told us in her gorgeous Scots burr, “Oh yes, the cows can get quite touchy when they’re pregnant”. She may have mentioned a previous accidental death-by-cow but I may have been too busy hyperventilating to hear that bit.

But all’s well that ends in not being killed by a cow. Our afternoon on the moor had been filled with beauty, mystery, inspiration and adventure! Our hostess made everything sound charming with her accent, and our lodgings in the middle of Dartmoor were comfortable, picturesque and restful. 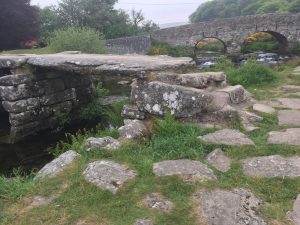 Janet and I had walked across a medieval clapper bridge and eaten a fine cream tea at the Two Bridges hotel. We’d delighted in English wildflowers and played pooh sticks at a stone bridge in a sweet little dell. We explored the House of Marbles in Bovey Tracey and met a kindred spirit at Pixie Corner (a story which I may share later). 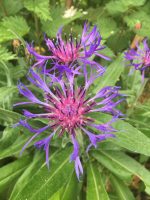 We may not have committted to further rambles, but with Postbridge being in the centre of the national park, every drive to any spot was a visual feast. We had a marvellous time in Dartmoor and alarming bovines notwithstanding, 10/10, would go out on the wily, windy moors again.

And as a bonus, Janet has been producing some gorgeous sketches! 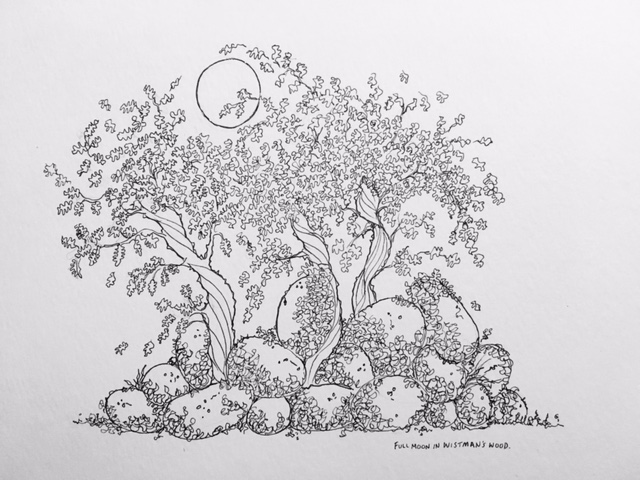