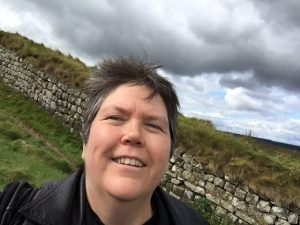 Londinium. Roman Baths. All roads lead, etc. I’ve been in various parts of the former Roman Empire, from Hungary, Egypt and Jordan to Rome itself.

It’s always fun to find little bits of older civilisations in layers under the current one. It’s like etymology for landscapes – the backstories that help to describe, to a degree, how the current narrative unfurled.

This trip, besides burrowing into Sherlock Holmes and Richard III, Tim and I have been poking about the remains of Roman Britain. In London we went on a self-guided Roman London walk and visited the remains of a Roman bath house located under an office building at Billingsgate. 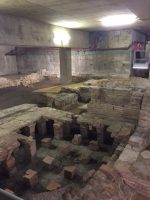 The guide was brilliant at bringing stones and dirt to life, describing the uses of the larger buildings that once stood here, and the remaining chambers, and drawing parallels with modern life (dodgy builders, cost-cutting measures, lovers’ trysts, unsolved mysteries).

Very much worth the visit! 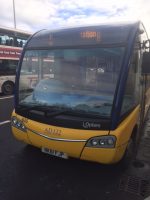 Of course, the Romans inhabited Britain for several hundred years, from the southern end right up to the Antonine Wall, north of the more famous Hadrian’s Wall, built in AD122.

Which, not coincidentally, is the number of the bus that runs in a circuit between Hexham and Haltwhistle, enabling those short on time or the inclination to hike to visit key sites along the remains of Hadrian’s Wall. 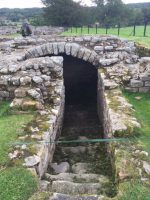 Our first stop was Chester’s Fort, which predates the wall, then boarded the bus again for Housesteads. The remains of a Roman fort are here too and, key for us, a large segment of the wall.

Tim had done a little googling. A walk between Housesteads and the next stop, Steel Rigg, should take about an hour and a quarter, claimed Google, giving us a topography map and a false sense of confidence. It’s only 4.6km, said Google slyly. It’s a sunny day. Go on. Walk a bit of the wall. 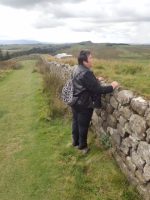 Off we went, wreathed in sunshine, the wall on our right, a song in our hearts. We were striding hilltops where nearly 1900 years ago, men from across Rome’s vast empire piled up stones to mark the extent of their Empire’s territory.

They served as citizens, or in the hope of becoming citizens. They maintained the border, defended it as required. They waited for letters from home, looking out over green hillsides and the vistas of all that weather rolling in, clouds gathering and parting, looming and clearing.

g poles passed us in either direction, cheerily saying it was hours to go until Steel Rigg, and with much rougher and muddier terrain.

We would have thanked them, but we were too busy negotiating steep rises and falls and trying not to face-plant among the rocks.

Finally, two hours into our one hour walk and still only half way to our destination, we came to a little farm, with a lovely little road leading right back out to that wonderful main road that had buses on it. We decided it had been fabulous. Beautiful and breathtaking and thoroughly worthwhile to have walked those hills alongside that amazing wall.

Then we went straight on down that farm road and caught a bus to the next stop. Sandwich and soup in the brand-spanking-new centre at The Sill fuelled us for a final bus ride to Vindolanda. 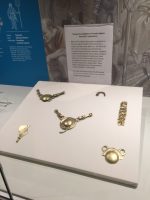 Only the preceding week, the news had announced that digs at Vindolanda had located a cavalry sword – a rare find, since such weapons were very valuable – and the brass fittings of riding harness. And not quite a month after being dug up from the site, these pieces were on display at the Vindolanda museum.

Weary with our triumphs, we got the bus back to Hexham – transported by AD122 back to 2017 and the joys of a hot meal at a Hexham pub and a hot shower at our B&B.

On the morrow, the AD122 took us to a brief stopover at the Roman Army Museum, which makes brilliant use of audio visual and a little 3D movie to bring the people of the Roman Empire to life. In the process, all those stones along which we tramped, all those walls razed to a few feet high, were depicted evocatively as the lonely outposts, for these soldiers far from home. 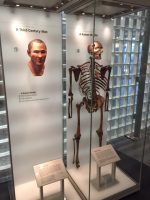 From AD122 to Haltwhistle and thence to Carlisle, where the Tallie House Museum gives up a little more of the region’s Roman history – including a murder mystery! The body of a man found dumped in a well was doubtless done in by foul play.

I’m sure Richard III would empathise, even if Sherlock Holmes is unlikely to ever solve it.

Tim and I visited all these museums thanks to Visit Britain; accommodation in Carlisle was courtesy Accor Hotels. 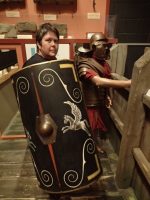 lead to Rome, and also to my most recent fiction.