The Lady Novelist chills out in the west

After the full-on days of Comic Con in San Diego, I was able to pull back a little on the running around and spent some time chilling out in Santa Barbara, San Luis Obispo and some smaller towns nearby.

The Pacific Surfliner train from San Diego passed through LA and on to the sunny shores of Santa Barbara, known as a beachside getaway for the wealthy and famous. And also, on our part, the fatigued and obscure.

We only had a few days there, but there was Spanish history at a reconstruction of the old Presidio and shade under a fruit-laden orange tree, a pond full of turtles, and bobbing about in the motel pool like a giant cork.

San Luis Obispo, a little way down the track on the Pacific Surfliner, turned out to be a charming little university town, whose population swells during the university year.

A regular Thursday night farmers market showed off the local strawberries and flowers and a friendly crowd. I even bumped into a visitor and his son who I’d seen earlier in the day on our visit to Hearst Castle.

is a bit out of town in an area called San Simeon. Built by the former media baron William Randolph Hearst, it was gifted to the state by his descendents. It’s lush, luscious, and always, for me, teetering on the border between impressive and crass, with all the genuine antiquities tucked into the modern walls.

Stars like Charlie Chaplin and Errol Flynn used to frolic here, though I was more intrigued on learning it had been occupied only by a skeleton staff for three years during World War 2, out of concern that Japanese submarines off shore would torpedo the place. Combine this with the unexpected atmospheric frequency of fogs and mists poised over the sea and shore here in the height of summer, it seems the perfect time and place to set a murder mystery!

Other surprises, besides the beachside fog drifts, included the wine! Yes, I know there’s Napa Valley, but I’d honestly just never dwelled much on American wine. But when in wine country, one should always try the local produce. Grey Wolf, as well as having a fabulous logo, makes a very nice drop.

I also chanced across some lovely art in my travels. At Joebella, a very decent cafe in Paso Robles near San Luis, beautiful bird artwork was on display. I couldn’t afford my favourite piece, a raven, but was delighted to find a print for sale so I pounced. Greg Ellis Valencia creates lovely bird art: another of my favourites was a bird painted over a page from an old aircraft book.

In San Luis itself, I came across a narrow gallery where artist Gene Francis was working on a painting. His style reminded me a little of Norman Rockwell. We got to talking and he showed me his back room full of fabulous memorabilia he uses as props for his work.

In our far-ranging conversation, which covered travel, the Bechdel and Sexy Lamp Tests (prompted by a sexy lamp in his prop collection) and how professional writers and artists don’t ‘wait for inspiration’ – we can’t afford to! Instead, we work when we don’t feel like working, we push through and create even on the hard days, and we relentlessly chase down inspiration when it won’t come willingly to the table.

One thing Gene Francis said to me was, “People who are mediocre do their best work every day”. And we both nodded and agreed that this was sage. 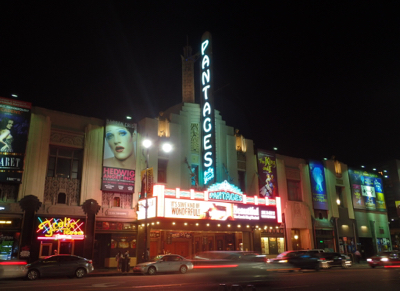 Back in LA, we were fortunate to get in to see the latest revival of Cabaret, based on the 1993 Sam Mendes production. I’d last seen a version of the Mendes production in Melbourne, with Sally Bowles played by Lisa McCune. This version, with Randy Harrison (who’d I’d last seen in Queer as Folk) as the Emcee, was as lively and (sadly) as relevant as it has ever been. Tim Richards has reviewed the play over on his travel blog, Aerohaveno.

The Hollywood Pantages Theatre is gorgeous, by the way: a theatre from the days when picture palaces were built to be sumptuous and grand. If you’re in Los Angeles in the next few months, you can get tickets for shows like Hedwig and the Angry Inch starring Darren Criss (of Glee) or the concert tour for The Monkees.

With an evening flight (for which I am currently waiting) back to cold and wintry Melbourne, we decided to make the most of the northern summer by going to Santa Monica to soak up the sun for a few hours. And look! They have plant-based dinosaurs! Surely the perfect note on which to complete my sojourn in sunny California!

On this segment of the trip, Tim and I were given travel, accomodation and theatre-going assistance by Visit California.