I had a blast reading an extract from my ghost story “Jane” at the Irish Ghost Stories panel at Worldcon tonight. Huge thanks to the fantastic Dr Jack Fennell who invited me to participate, and my fellow panellists.

A big shout out to all the people who came to me after the panel to ask how the story ends: you can get it in The Ninth Cut anthology, but the award sponsor, Melbourne’s Athenaeum Library, also has it online.

I loved the idea of a kids’ book charting the location of monster stories around the world – it’s in part what I look for in a destination!

The Atlas of Monsters and Ghosts by LonelyPlanetKids.com is a gorgeous looking book, with Laura Brenlla’s fabulous Tiki-esque style (which reminds me a bit of Shag’s art). It’s an atlas, so the large maps of continents and regions give a cute overview before each section, and an appendix introduces various water monsters of the world as well as a checklist of the ghosts of famous figures, including Anne Boleyn.

The conceit of the whole book is given in the introduction, where Dr Van Helsing welcomes young readers to his version of Monster Hunting 101 on where to find all these creatures and what to do if you encounter them.

Because The Atlas of Monsters and Ghosts is aimed at young readers (9-12 years) the entries are fun and on the silly side. For some readers they might be a little light on, though some better known beasties, like Dracula, have double-age entries with more detail.

The book also places folklore, urban legends and fictional characters all on the same footing without mentioning origins. An entry on Frankenstein’s Monster makes no mention of Mary Shelley any more than the one on King Kong mentions RKO Pictures or creator Merian C Cooper. Actual locations thought to be haunted, like hotels and ghost towns, are noted with the same weight as indigenous folklore. (Having said that, I was amused to see drop bears and bunyips listed with equal weight in the Australian section.)

I don’t know if kids will find that as frustrating as I did – it’s a shame that the origins of these stories aren’t acknowledged, especially for entries that have an individual creator.

Still, The Atlas of Monsters and Ghosts is a charming book and a great starting point for doing some extra googling on folklore, fiction and urban legends before heading for these parts of the world!

Buy The Atlas of Monsters and Ghosts: 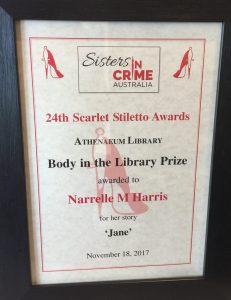 This year I entered the Sisters in Crime Australia Scarlet Stiletto Awards for the very first time. The awards, hosted by Sisters in Crime and a number of generous sponsors, are for crime stories written by Australian women and with female protagonists.

I am absolutely thrilled to have received the Body in the Library first place with my ghost story, ‘Jane’.

An Australian Literature research student meets a ghost in a state-of-the-art private library on a remote bush property. She tries to unravel the mystery of the ghost’s origins while the dangers of the present, both human and natural, loom.

The awards night was fabulous! Most of the 26 shortlisted authors (out of 186 entrants) were there, some coming from interstate. Jane Clifton was a marvellous MC, and did a fantastic interview with the ever-lovely Sigrid Thornton (with whom she co-starred in the iconic TV series Prisoner).

Congratulations to all my fellow short-listed authors, and category winners! Huge thanks to Sisters in Crime and the award sponsors, especially the fabulous Athenaeum Library!

A big thank you too to Lindy Cameron, who looked me in the eye when I told her I’d never written for the awards and instructed me, in no uncertain terms, that this year I had to enter.

Books and Publishing has a full list of the winning entries. 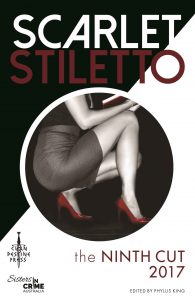 If you’d like to read ‘Jane’ and the other award-winning stories, you can pick up Scarlet Stiletto: The Ninth Cut 2017:

You can also find out more about the awards at Sisters in Crime.