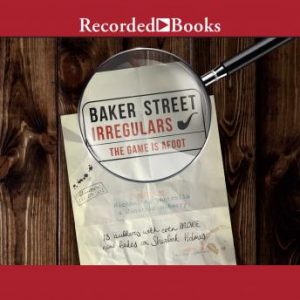 I have two excellent bits of news about some of my Sherlock Holmes short fiction!

A while ago, the anthology Baker Street Irregulars: The Game is Afoot was published, featuring stories about Holmes and Watson in alternative universe settings. My story, ‘The Problem of the Three Journals’ puts them in contemporary Melbourne – they run a cafe called The Sign of Four, where John is a barista and he helps Sherlock, a perpetual science student, solve mysteries for their customers!

The audiobook of that anthology, which I wrote about in April, is now out through Audible and Audiobooks.com. I’m delighted that ‘Three Journals’ is being read by a New York-based Australian actor, Jamie Jackson.

(I’ve listened to Mr Jackson’s reading of my story and I can’t tell you how delightful it is to hear my words brought to life! Sherlock hilariously ruining a nasty bloke’s love life at the start is my jam!)

If audiobooks are your jam, you can get it here:

In the meantime, Belanger books is releasing an anthology of stories that are sequels to original Arthur Conan Doyle Sherlock Holmes stories.

I’ve written a sequel to ‘The Blue Carbuncle’ – I was never terribly happy that Holmes and Watson were sitting down to dinner while they knew an innocent man was still held in prison.

The three-volume anthology, Sherlock Holmes: Adventures Beyond the Canon, is being funded through a Kickstarter campaign that will go live in August.

My story, ‘A Gentleman’s Disagreement’, will appear in the first volume. I’ll post again when the Kickstarter launches, so this is just waving hello to people who like to support books through them.

For more information on the other stories and authors from the anthology, there’s a blogpost on Belanger‘s site.