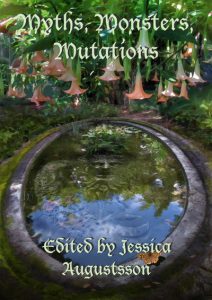 I’m delighted to announce that my short horror story, “Passive Aggressive”, has been accepted for Jay Henge’s next anthology, Myths, Monsters, Muations.

I’ve also had a science fiction story accepted for their following anthology, Wavelengths, though the cover isn’t yet available for that one.

Jay Henge creates entertaining themed anthologies. I have works in two other anthologies – “Death’s Door” in Intrepid Horizons about a young poet’s odd relationship with the Grim Reaper, and “Show and Tell” in Encounters – where it’s a possessed mummy hand versus Class 1B and the odds are pretty even.

I’m not sure yet of the release date for Myths, Monsters, Mutations, but in the meantime you can find these other JayHenge anthologies: