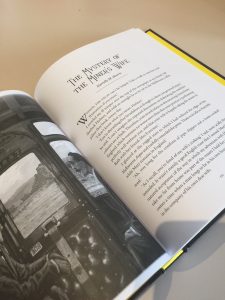 I was delighted to have an opportunity to write another Holmes story set in Colonial-era Victoria after my Holmes/Watson 1893 romance, The Adventure of the Colonial Boy, and promptly set about using my goldfields research in a more traditional Holmes+Watson tale. 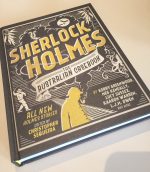 It’s 1890. Holmes’s fame has spread even to the colonies, and he and his stalwart chronicler Watson are swept up in an array of mysteries Down Under. They find themselves summoned from place to place, dealing with exciting and unique mysteries in every corner of this strange island continent.

My story, “The Mystery of the Miner’s Wife”, begins with Watson in a grumpy mood in a Melbourne coffee palace , but soon Sherlock Holmes and his Boswell are catching the train to Ballarat to solve a peculiar murder. Here’s an extract:

The sergeant’s weary eye lighted first on me, and after an uninterested sniff, on Holmes. He sniffed again. “This is a London detective, is it?” asked the surly fellow. “He doesn’t look much. I’d bet we’ve got detectives twice as good even here in Ballarat, let alone Melbourne or Sydney.”

Holmes’s fine lips quirked in a swiftly suppressed grin. “A betting man, are you?” he challenged in good humour, “What about a wager, then. I’ll tell you a secret about yourself and if I’m right, you’ll fetch Detective Meredith for us. Does that sound fair, Sergeant-?”

“Clark,” smirked the sergeant, “And if you’re wrong?”

“A sovereign, and the boast that you have bested the London detective, Sherlock Holmes.”

My story has a marvellous illustration by Jan Scherpenhuizen, one of three people providing gorgeous images, a la The Strand Magazine, for the anthology. The other two artists are Philip Cornell  and Marcelo Baez.

Or you can check Echo Publishing for more details.