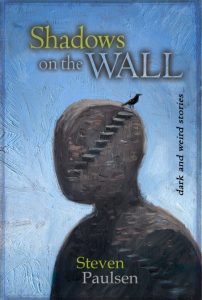 My latest book is a short story collection called Shadows on the Wall. I played around with a bunch of titles but none of them seemed fit right. Then one day I remembered a discarded novelette I wrote many years ago that was called “Shadows on the Wall”, and I realised it was a great title for my collection. There are numerous shadows lurking in these stories. Some are overt, such as in “The Black Diamond of the Elephant God” where the protagonist is pursued by a shadow, and in “In the Light of the Lamp” where an ancient brass oil burner casts shadows on the wall.

But for me the title also spoke to the theme of the book as a whole. When Isobelle Carmody read the collection, she wrote that the stories are “shadows, shifting on the wall, barely seen, slipping into our minds to lie, light and cold over our hearts…” So I think the title works well.

That’s a tough question because my book is a collection of short stories. But if I were to pick one story, there is a new novelette in the book called “The Black Diamond of the Elephant God”. The man character of this story is a 19th Century English Orientalist and Sanskrit scholar named Giles Freeman. To play him, I would choose Laurence Olivier in his mid-late thirties. He would have no doubt done the character proud.

My favourite fictional duo are Fritz Leiber’s sword-and-sorcery rogues, Fafhrd and the Gray Mouser. Unlike so many wooden sword and sorcery characters, they feel alive, albeit larger than life. Fafhrd is a tall sword-wielding northern barbarian, prone to the occasional song, while the Mouser is a short thief and swordsman, with a little skill in magic. Together, they carouse, brawl and gamble their way through some rollicking, chaotic adventures.

Hmmm… The stories in this collection vary a lot on tone and style, plus they were written over a few decades so it’s difficult to pick just one song that represents the book.

I probably listened to David Bowie a lot when I wrote some of these stories, so it’s reasonable to say his music was an influence. I’ve been listening to his 2013 compilation album, Nothing Has Changed, which was the first album to showcase his entire career.

As for a song that reflects the theme, let’s go with John Lennon’s ‘Watching the Wheels’ from his Double Fantasy album. It’s a tenuous link, but people do say I’m crazy doing what I’m doing, and I like that he said he was doing fine watching Shadows on the Wall.

About Shadows on the Wall

Shadows on the Wall is a short story collection that contains the very best of Paulsen’s dark and weird tales…plus stunning new fiction written expressly for this volume. 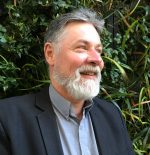 Steven Paulsen’s bestselling dark fantasy children’s book, The Stray Cat, illustrated by Hugo and Oscar Award winning artist Shaun Tan, has seen publication in several English and foreign language editions. His short stories, which Isobelle Carmody describes as beautifully written and subtle, have appeared in magazines and in anthologies around the world.

His short story collection, Shadows on the Wall (IFWG Publishing Australia, 2018) contains the best of Paulsen’s dark and weird tales plus new fiction written expressly for the book.

Buy Shadows on the Wall