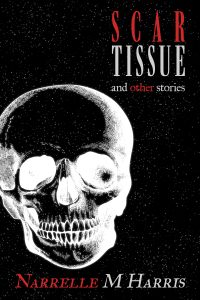 My short story collection, Scar Tissue and Other Stories, was published in collaboration with Clan Destine Press in April 2019.

The title story, “Scar Tissue” was published originally in the online magazine Matilda and sets the theme of the collection. Each story is connected in some way to the physical and emotional scars of suffering, and how we deal with them, how we survive them. Or not.

I don’t know how obvious the theme is from story to story – some of the scars are more comical than painful; often the meaning is not explicit; but in my head, at least, that is what ties to the stories together. Hurt and survival.

Other stories include a canon-era Holmes♥Watson werewolf adventure, a new story about Melbourne vampire Gary Hooper and his friend Lissa Wilson, seen through someone else’s eyes, a Ravenfall short story and several new Lost and Found flash fictions.

The collection has been created with the support of my Patreon mini-Medicis, and was provided to them as a thank you gift.

If you like short stories – or if you’d like to see what the fuss is about – Narrelle is an expert at the craft. Highly recommended. ~ Julia Bozza; Goodreads

Willsin Rowe, who has done so many wonderful covers for my CDP and Patreon titles, created the cover from an idea of mine, and got it spot on!

Buy Scar Tissue and Other Stories

Add Scar Tissue and Other Stories to Goodreads

The full table of contents is: