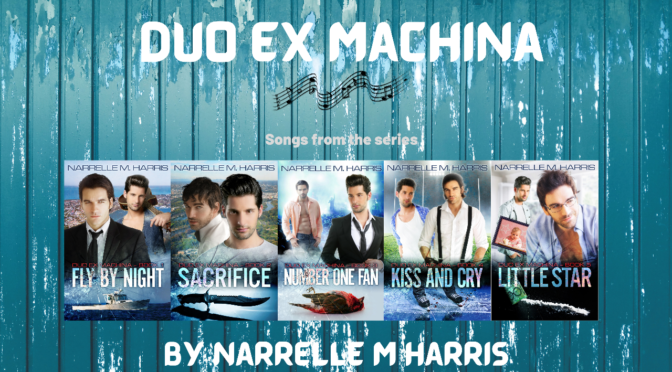 The five novellas of the Duo Ex Machina series are full of song lyrics I wrote to go with the stories.

Some are by the two-man band Duo Ex Machina (comprising the two lead characters, Frank Capriano and Milo Bertolone, who are also boyfriends). Others are by their friend, Gabriella Valli, and yet others are songs on the radio or that are played during Milo’s time as a contestant on an ice dancing show (in DeM 4: Kiss and Cry).

Now, in partnership with Joshua King of Golden Hour Studios, some of those lyrics are becoming actual songs, released on Apple Music, Spotify and other services!

Listen to our first single – Hymn/Him, from Duo Ex Machina 4: Kiss and Cry on:

Our second single is High, from Number One Fan, featuring Jenni Powell of Riff Raiders on vocals.

You can help us make more music by buying or streaming the Duo Ex Machina songs from Apple, Spotify or Amazon Music: sales proceeds go towards new music.

You can also support the project by: