The Books of Love: The Apothecary’s Garden by Julie Bozza 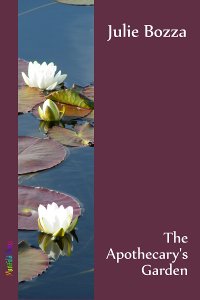 Hilary Kent, a Londoner all his working life, retires to Wiltshire after an estranged cousin unexpectedly leaves him an inhabitable tower surrounded by an overgrown physic garden – and that’s when graduate student Tom Laurence suddenly erupts into his life, convincing him that together they can restore the ancient garden to its former glory.

Tom’s cheerful friendship is the best thing that’s ever happened to Hilary and he’s perfectly content with that until, to his astonishment and confusion, it seems that Tom’s affection for him is beginning to grow into something more … something he feels he probably shouldn’t allow …

When I was sixteen, my favourite movie of all time was released: A Room with a View with Maggie Smith (does that woman ever age?) and Helena Bonham Carter. It was a rich adaption of the book written by E.M. Forster and I was enchanted. It wasn’t a popular film and was quickly pushed to the independent movie houses. Every week while the film ran, I’d catch the train into the city, walk up to the Forum Theatre on the corner of Flinders and Russell Streets and I’d watch every viewing surrounded by the opulence of Grecian statues, gargoyles and a surprisingly realistic fake night sky.

I became obsessed with this film. Once it was out on video, I bought it. Even though I was too poor to own a video player. I also bought the DVD and blue ray versions as soon as they were available, despite not being able to actually watch them on any device I owned. Like Gollum, I would caress and cosset; I’d stroke the cases and whisper “precious”.

Every now and then, I’d find someone interested in seeing what all the fuss was about and I’d let them borrow my precious so they could watch the Best Movie Ever. Inevitably, they’d come back with a pensive look on their face and say, “Nothing actually happened!”

Now I will freely admit that I may be slightly biased about this movie, but when people say “Nothing actually happened!” I usually suffer a wee break with sanity. Because this is a real review for a blog and shit, I won’t go into detail, but suffice to say, I wail; I develop a vocabulary that would make Rosanne Barr blush; and I have been known to tear at my hair as I scream “OF COURSE NOTHING HAPPENED YOU NIMROD … THAT’S THE WHOLE (NASTY WORD) POINT!”

This book, The Apothecary’s Garden, gave me the same feeling as my first viewing of The Best Movie Ever. I was instantly enchanted.

I usually read a book of this size in a few hours, but I didn’t want it to end and managed to drag the experience out over 4 days. This story of unconventional love is whimsical and almost magical in its purity. I cried, not because of the ending, but because it ended.

Nothing actually happens yet everything happens. A man who has merely existed for 65 years is given the chance to actually live for the remainder of his life. A man who grew up in an era where the act of loving another man was illegal, was able to find acceptance for his irregular relationship; and in that acceptance, could grow into his loving potential. Tom brought energy, vitality, passion and love into a barren existence and just as he nurtured the garden; he nurtured Hilary.

This book won’t be for everyone. It is sweet and romantic. Languid in pace. The language is quintessentially English and there is a lot of tea.

I spent seven years living in England and I love the whimsy and fussiness of the over-regimented society. No, I couldn’t live there anymore, but reading or watching an enchanting, gentle story that captures the essence of the beauty that can be England and its people; that makes my heart happy.

Julie Bozza has become an author I will automatically buy and be warned, dis her, or this book, and I may just frighten you with my response.