The Books of Love: Salamancis by Kerry Greenwood 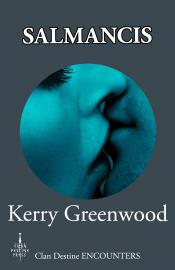 Lovers desire to unite with the other half of themselves. When the desire is deep enough, when the love is profound enough, the Gods listen. And they have a funny sense of humour.

Cold, naked, beautiful, expendable, the merman washes ashore at her feet. There is nothing she cannot do to him.

This is two very short stories from the Clan Destine Press’s Encounters Imprint. I’ve not read any Kerry Greenwood before (although I have gifted some of her Miss Fisher novels and know of her by reputation) so I was totally unprepared for the sheer poetic beauty of her prose.

Unfortunately, when I did that, I encountered horrible jarring sexism hidden in the sensual text. The story is very short and necessarily sparse but I’m sure she could have described the difference between the two protagonists, one male, one female in other ways than ‘His mind is […] all straight lines.’ And she thinks in loops. Other differences are also espoused, but not one of them isn’t a sexist trope.

My advice is to just read it and enjoy, don’t try to analyse. The first reading was pure delight.

The second story – Jetsam – is slightly longer, and lacks that sense of poetry. Here Ms Greenwood is using her talents to world build a dysfunctional future where the lawyers and Judges are heavily guarded against vicious criminals. Is this a future she, a lawyer herself, fears for humanity? Her protagonist is a Judge, who has rather foolishly slipped away from all forms of electronic security for some precious time with the real world. This real physical world throws up half drowned men and produces gales which require sheltering from, and handy caves out of nowhere to shelter in. What follows as she tries to save him from hypothermia is even more surreal, and just a little pre-emptive and unsatisfying. An interesting world, which could lend itself easily to a full novel, but this story needed a lot more work.

The male protagonist in both stories has the same name, but there the connection between the stories ends. He is clearly not the same person. The worlds in which both Dions find themselves are also very different.

LynC is a 50-something year old widow, juggling the demands of writing Science Fiction and being a single Mum.

In the past two years LynC has had four short stories published; one of which — “Nematalien” (on www.narratorium.com) — was nominated for an award in 2013. Her first novel — Nil By Mouth (Satalyte Publishing) — was launched at the Australian National Science Fiction Convention in Melbourne in June 2014.

LynC resides, with her two ‘new’ adults, four cats, and two canaries, in a hidden area less than ten kilometres from the Melbourne CBD (in Australia) surrounded by creeks and wooded hills.