The Books of Love: Forgotten Fragrance by Téa Cooper 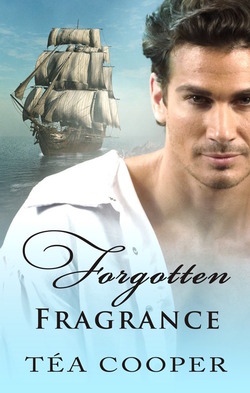 Only one woman can confirm his innocence, and release him from the torments of his past.

Determined to throw off the shackles of her convict past, Charlotte Oliver accepts her employer’s marriage proposal, even though she does not love him, and together they board a refitted whaling schooner bound for Sydney to begin their new life.

But life has a way of disrupting plans, and during the voyage the Zephyrus undergoes a mutiny. Captain Christian Charity loses his ship, but he also risks losing so much more. Charlotte has in her possession a tiny blue bottle and an Angel coin. On their own, they mean nothing more than a keepsake, but to Christian, they could mean everything – a past remade and a future with love.

I wasn’t sure what to expect when starting this book. I haven’t read any historical romances set in Australia, and now I’m beginning to think I’ve missed out. Our heroine, Charlotte, is finishing the last of her convict sentence by serving her soon-to-be-husband Marcus as a housekeeper. It seems all is innocent and although she doesn’t love her fiancé, she admires him and is resigned to marrying him, as her one true love, Jamie, has been lost at sea.

When they board the Zephyrus, bound for Sydney, she soon learns another side to Marcus, and we meet Captain Christian Charity. Yes, his name is Christian Charity. At first I thought it was a joke, but all is explained. The author has obviously put a lot of work into the research for this book, and it shows with seamless world-building. I learned more about what a keelhauling involves than I wanted but it is something that I’ve read about for many years without really knowing what it was. Now I do. I also learned that a female convict could marry and thus rid herself of her sentence. I didn’t know they could do that.

Aside from educating me, this book did have a lovely romance. Although there is no sex in this book I wouldn’t call it a sweet romance, as there are several darker moments: the aforementioned keelhauling, as well as a near-rape and some almost slavery. I would have liked Charlotte to be a little more proactive, but I suppose she did what she could do as a lady of her time. I can’t fault the author for trying to stay authentic.

Aside from the silly title, I enjoyed this book, and will be checking out more of this author’s work. I recommend this for lovers of historical romances, just plain historicals and for lovers of Australian history as well.

Paula is currently studying her last semester of her Diploma of Professional Writing and Editing.  It is her dream to publish a steamy romance novel, or perhaps the next great fantasy novel, or perhaps become the next Stephanie Meyers (although she would never write about sparkly vampires – that’s just silly).  Her first dream however is to just finish a first draft.

In the meantime she likes to read steamy romances and great fantasy novels, and you can find some of her reviews at The Apathetic Reviewer and on Goodreads.