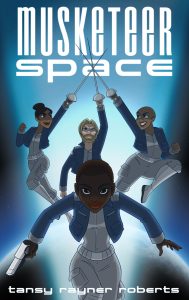 Tansy Rayner Roberts is responsible for much delight in my life, through her awesome books and novellas as well as her thoroughly delightful actual self.

She’s currently responsible for me mainlining the BBC Musketeers TV series, and how I’ve pestering people to watch it ever since.

It all began with her book, Musketeer Space.

I downloaded it. But man, did that file look looooooooooong on my Kindle, with dots leading off to the right beyond any other book I had on the device.

So I put off reading it. And put it off. Surely it would take ages.

Finally, though, I’d read every other TRR book in my collection, and I had time, so I finally opened it.

Readers, I tore through that book like I was going to get a prize for reading speed. And I DID get a prize! I got an awesome story, that was sprightly and funny and full of action and friendship and diversity and tragedy and romance and combat and consequences!

Basically, it was everything I always love about Tansy’s work. 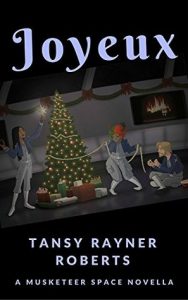 Having gobbled down this delight that goes tripping along, I naturally immediately also seized upon the  Musketeer Space short Christmas story she’d written for her Patreon supporters, Joyeux. It’s set before the epic novel, and richly fills out some of the backstory while creating a strong, wondeful story in its own right.

I stared about hungrily for a bit and then realised I had also downloaded Tansy’s book of essays about celluloid Musketeers.

Even if you haven’t seen the films and shows in question, the essays in It’s Raining Musketeers are written with such humour and charm that it doesn’t matter. 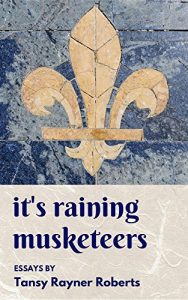 Still, by the time I was up to her glorious review of the third episode of BBC Musketeers, warning all the way about spoilers, I thought it best to watch the thing before continuing with the essays.

I watched the thing. I fell madly in love with it. With friendship and dashing hats. With men who were full of fire and feistiness, passion and playfulness, who could hug it out and be emotional.

With women who had agency and passed the Bechdel test, the sexy lamp test, the ‘do I want to drown them in the duck pond?’ test. The queen, Constance, Milady and brilliant guest stars, all superb and with their own motivations and faults and genius.

Even the foolish king, played so adeptly by Ryan Gage, won my heart. None of the later villains was as brilliant as Peter Capaldi’s Richelieu, who died so that the Twelfth Doctor could live, but they gave it a damned good shot, including Rupert Everett, who Richard-the-Thirded up his Marquis de Feron with terrific loucheness.

Did I mention the diversity? A black Musketeer, a hispanic Musketeer. One of them’s Italian. The last is played by Tom Burke, son of my favourite Watson ever, David Burke, so I was kind of in love with him through inheritence anyway.

So I gulped down three seasons of this splendid series, which has a whole story arc and comes to a natural conclusion that was satisfying and joyful.

Frankly, it had to be good to compete with TRR’s awesome take on the Musketeers as epic, diverse, queer space buddies who are the very epitome of swash and buckle.

Then, Musketeer-hungrier than ever I went back to finish the book of Musketeer essays. (TRR’s reviews continued to be spot on, and I’m glad I watched the show and avoided the spoilers, just so I could enjoy the events all over again while reading about them.)

So here I am, all full up to the brim with Musketeers.

I suppose one of these days I should actually read the Dumas original.