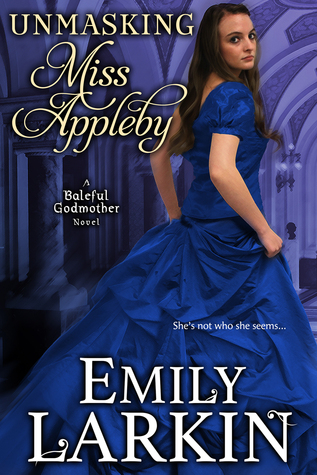 When I first began to read romance fiction, Anne Gracie’s Regency romances were the first to show me how great the genre could be – huge fun, cracking pace, a sense of the period setting while keeping the protagonists real and vivacious to modern me.

Now I have another favourite modern Regency romancer – Emily Larkin. If Unmasking Miss Appleby is anything to go by, I’ll be gulping down her ‘A Baleful Godmother’ series like there’s no tomorrow.

Unmasking Miss Appleby begins with a familiar enough notion – the intelligent, sweet heroine, sadly orphaned, who must now be raised by unsympathetic extended family, denied her rights and modest inheritence, treated as a burden and repressed by rigid conservatism.

The little twist here is provided by a baleful godmother who, on Charlotte Appleby’s 25th birthday, suddenly appears to grudgingly grant a gift of faerie. It’s all the result of some favour done a few generations back, and the faerie would be thrilled if she can make Charlotte regret her choice of gift, but Charlotte’s no idiot. She asks all the right questions and, mindful of her yearning for independence and for useful occupation, she negotiates for the gift of metamorphosis. She promptly transforms herself into a male body and goes off to apply for the job of secretary to the abolitionist, Lord Marcus Cosgrove. It’s a job more dangerous than usual, considering Cosgrove’s enemies, but Charlotte – as Christopher Albin – is keen for employment, believes in the cause and has a secret faerie weapon.

There proceeds a brilliant gender-smeared adventure and love story. Charlotte’s sheltered life as a woman becomes exposed to the more earthy knowledge that a man is expected to know. She has to learn what her new body is like (and has to change back into a woman the first time she needs to pee, because she can’t quite work out how it works with her ‘pego’). Marcus thinks Albin is an oddly sheltered young man, having to explain so much, like the activities in the brothel where they go to fetch Marcus’s wastrel of a cousin.

Charlotte learns about a whole new world as Marcus holds these man-to-man talks. She discovers her own body, in both its gender expressions, and in her plan to rid herself of of inconvenient desire for her boss go well until they don’t, and she falls in love with Marcus Cosgrove.

Marcus’s life isn’t simple. He was betrayed by his wife, who subsequently died tragically. As an abolitionist, he has enemies. Someone plots against his life – but is it the threat from his political enemies, from those who might suffer financially from an end to slavery, from his former best friend, his late wife’s distraught brother, or that wastrel cousin, who will inherit title and estates if Marcus dies without producing an heir.

The story twists and turns; there’s danger and violence. Every time Charlotte shifts her shape into a new form, she has to learn how each new body works (I love the sense of these scenes – Charlotte suddenly as a sparrow having to practice flying because she initially gets vertigo). But she grows as a person while learning how best to protect herself and the man she loves, and the causes they both hold dear.

Bright, vivacious, funny and clever – I had the best time reading this book and can’t wait to read more in the series.

One of the great joys of this lovely book is that you can actually get the e-book for free if you sign up to Emily Larkin’s reader newsletter.

This will also let you get the four-novella prequels, The Fey Quartet, which tells the love stories behind the favour Maythorn Miller did to be granted these grudging wishes from Faerie, and what happens to her and her three daughters, Ivy, Hazel and Larkspur. I’m thoroughly enjoying these stories too!