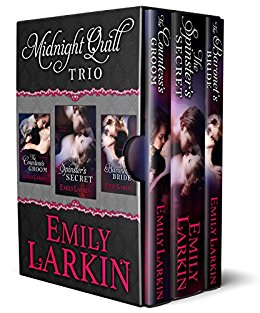 We all know I’m a Larkin fan, having previously gibbered excitedly about the books in her Baleful Grandmother series of regency romances with a magical element.

I’ve discovered I can always count on Emily Larkin for partnerships of equals: honourable men with heart and brains, and vulnerabilities of their own; women of humour, intelligence and courage, with determined agency even when they’re restricted by society and economic dependence. If I’ve had a rough week, I’ll always reach for Emily Larkin or Tansy Rayner Roberts.

Larkin’s non-magic regency romances are just as delightful, and I recently devoured the novel and two novellas in the ‘Midnight Quill’ series. 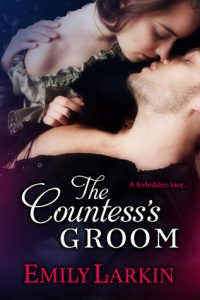 The series begins with a novella set in 1763, The Countess’s Groom, in which a terribly abused young wife is falls in love with her groom, Will Fenmore, who is trying desperately to save her from her brute of a husband without ruining her. The Countess, Rose, is just as imprisoned in her vile husband’s absence by her maid Boyle.

It’s not all down to Will, however. Rose finds courage and determination, and slowly learns to trust the giant but gentle Will. She learns from him, too, that love, and making love, can be tender and joyful.

Larkin always paces her stories perfectly, with just enough detail, just enough danger, to keep the heart racing, even though you know love will win.

Throughout her trials, Rose keeps a diary of her experiences, from the abuse at the hands of the Count, to her blooming under Will’s loving touches. She keeps quite explicit details, and it’s this diary, hidden away in the walls of her room, which is found and made good use of in the novel-length story of the trio. 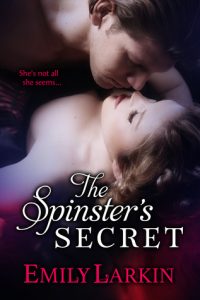 Set in 1815, The Spinster’s Secret sees Edward Kane returning from war, his face and hand disfigured from his wounds at Waterloo. He comes to the grim Creed Hall to return the worldly goods that belonged to his dear friend Toby, Strickland who died before his eyes in the battle.

Circumstance leads Edward to make a rash promise to Sir Arthur Strickland – Sir Arthur has found that a scurrilous author lives in his town! Disgusted, he wants the perpetrator found, exposed and driven from the too-appropriately named Soddy Morton. He thinks the poor writer, whoever it is, should be left in peace (and after all, the Cherie stories do no harm) but he’s honour-bound now.

Which is awkward, considering who it is.

Sir Arthur’s niece, Matilda Chapple, is Toby’s beloved cousin. She’s considered too tall, too rangy and too plain to be a catch for anyone. Her natural wit, warmth and intelligence oppressed by the puritanical strictures of the household, she has a plan to earn enough money to set up an orphange school and escape. And she’s doing it with the aid of the diary of the former Countess and its explicit content.

In fact, Mattie is anonymously writing the very popular and very sensual ‘memoir’ of Cherie. The fact that Mattie’s a virgin matters not at all, as between the diary and one or two other saucy books, she’s making it all up very nicely. That is, until her publisher asks her to write the story of how the fictional Cherie lost her virginity to her dear, late husband.

Larkin, as always, weaves a wonderful story with characters of depth and charm. Edward and his friend Gareth, who lost an arm at Waterloo, are both dealing with what we’d now call Post Traumatic Stress as a result of the horrors of that battlefield.

One thing I always appreciate about Larkin’s books is that her women may be strong or soft, frightened or bold, sporty or delicate, but they are never less than whole people, just as her heroes aren’t all alpha, and have their own fears and doubts as well as strengths and courage.

Larkin brings an ending which is true to both those things, and made me very happy with the balance.

I actually read The Spinster’s Secret before The Countess’s Groom, and neither suffered from being read out of order. (Larkin says in the trilogy forward that many people read them this way.) However, the third book in the series should definitely be the last to read, as it has spoilers in it for The Spinster’s Secret. 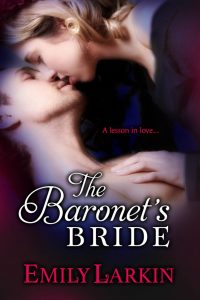 The last story in the series is the novella, The Baronet’s Bride, dealing with the wedding night of two of the secondary characters from The Spinster’s Secret.

Gareth Locke lost his arm at Waterloo, and he’s still struggling to cope with the loss as well as the ongoing pain. But he’s determined to show no pain, no doubt, no weakness to his new bride, Cecily, whom he met at the dire Creed Hall. Cecily has been married before, which is a relief. That should make things easier.

Cecily, who was married for two weeks before her husband died in an accident, so her experience really isn’t what Gareth thinks it is. Cecy’s general view is that sex is a painful, messy, unpleasant thing that you endure for the sake of the man you love (who seems to enjoy the messy experience) and to have babies.

Those two attitudes are going to meet head-on in the most awkward wedding night ever.

Larkin of course can be trusted to write them out of the awkwardness towards gentler understanding and then a night of caring, loving, joyful passion. The whole night takes nine chapter but, oh, what chapters they are!

The three stories are available separately or bundled as the Midnight Quill Trio. I highly recommend all three if you like smart, funny regency romance full of well-rounded characters and charm.