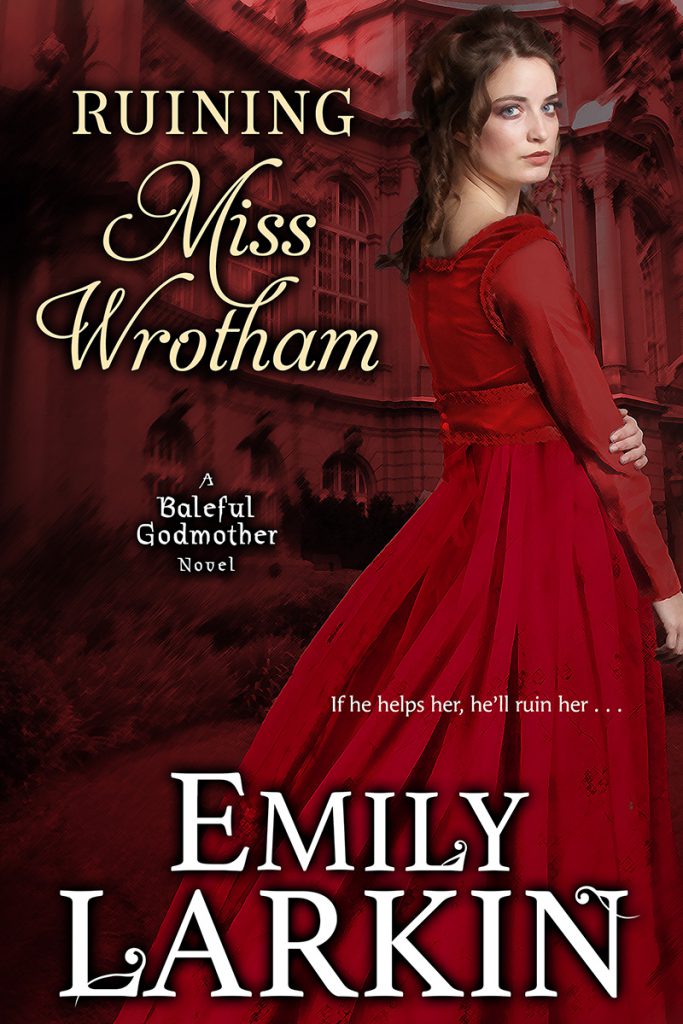 Ruining Miss Wrotham is the fifth in Emily Larkin’s Baleful Godmother historical romances. Like the splendid Unmasking Miss Appleby before it, it’s set in the Regency period and follows the story of a descendent of a woman who used a faerie wish to grant her female descendents a wish of their own on a significant birthday. Wishes are always granted but are not always wisely chosen – this faerie godmother is baleful indeed. Some wishes for faerie gifts end in madness and death.

I went ahead to read Ruining Miss Wrotham without first reading the intervening books of the series, but it interfered with my enjoyment not a single jot. This story is as well crafted and energetically paced as the first, with crisp characterisation, wonderful wit and rich period detail, yet all with a modern sensibility. No swooning heroines here, and the heroes are strong and kind.

Eleanor Wrotham has sworn off overbearing men, but she needs a man’s help—and the man who steps forward is as domineering as he is dangerous: the notorious Mordecai Black.

The illegitimate son of an earl, Mordecai is infamous for his skill with women. His affairs are legendary—but few people realize that Mordecai has rules, and one of them is: Never ruin a woman.

But if Mordecai helps Miss Wrotham, she will be ruined.

Ruining Miss Wrotham follows Eleanor – otherwise known as Nell – as she tries desperately to find her sister, who really is a ruined woman, having run off with a soldier when she was fifteen. Sophia’s ruin has tainted Nell as well, ending her engagement to Roger, Earl of Dereham. Abandoned by their father, Sophia has been left fending for herself, and her letters to her sister have been intercepted and destroyed.

But Nell has finally received a long-delayed letter from her sister, and she’ll do anything she must to save her. But it’s still a week until her 23rd birthday, when she’ll wish for the faerie gift of being able to find people. Until then, she’s relying on Roger’s cousin, Morcedai Black, the illegitimate son of the previous Lord Dereham, because a week might be too long.

Nell learns that, despite his reputation as  rake, Mordecai Black is a decent man, and though he’s had lovers he has never ruined a woman. He’s also in love with Nell’s vivacity and repressed penchant to be unconventional, but his proposal is rejected because she finds him dictatorial. She’s had quite enough of men telling her what to do.

But she’s falling for him too, and decides that if she’s ruined by association anyway, what would it matter to take the next step?

Ruining Miss Wrotham takes our characters across England and too unsalubrious parts of the world in the desperate search for Sophia and her baby. It also takes Nell and Mordecai through their own histories and growing connection, through danger and the arrival of the faerie gift, which doesn’t go as planned.

It’s an emotional ride, but with the comfort of knowing it will arrive at a happy ending. It was a much-needed balm after I’d finished reading the dark and depressing The Handmaid’s Tale and The Little Stranger in the weeks before.

Ruining Miss Wrotham has launched my Month of Reading Happy Books as an antidote to the preceding two and the state of the world generally, and I couldn’t have made a better choice!