Catching you all up with some of my Happy June reading, because part of it was catching up with all the Baleful Godmother stories by Emily Larkin I hadn’t yet read before launching into Ruining Miss Wrotham!

I’ve already said how much I loved the first in the series, Unmasking Miss Appleby, and I’ve also read The Fey Quartet, which follows the stories of Maythorn Miller and her three daughters, the progenitors of the faerie gift that keeps on giving.

When Ruining Miss Wrotham came out just when I needed a happy book, I gobbled it up pretty quickly, and then went back to the intervening tales – Resisting Miss Merryweather, the second in the series, is a novella, as is #4, Claiming Mister Kemp – and it was seeing that the series included an M/M romance that made me keen to see what Larkin was going to do with it all. 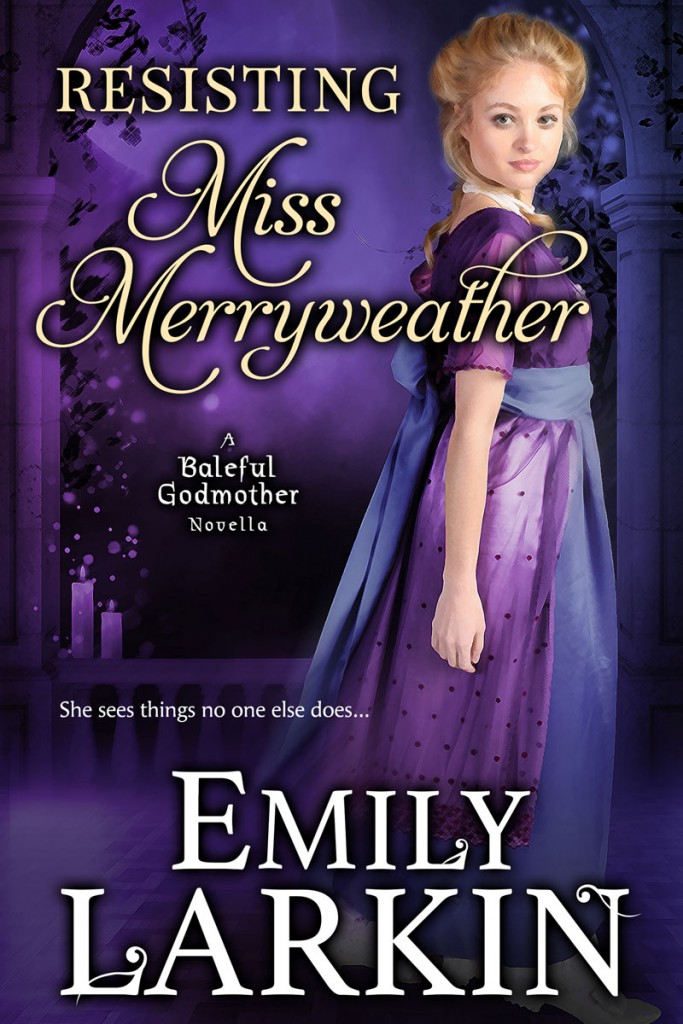 It is a truth universally acknowledged, that Faerie godmothers do not exist.

Thus proclaims the facing page of each of the Baleful Godmother series, just before launching into a story where a woman descended from Maythorn Miller’s three daughters either has received, or is about to, her faerie gift from a resentful Faerie queen. These women must choose well, or risk madness and death. Even when they have a gift, life isn’t necessarily made easy.

In this novella, following up on Unmasking Miss Appleby, we meet Anne Merryweather – known as Merry to her family and friends – and her encounter with Barnaby Ware.

Ware is on his way to meet his estranged friend Marcus Cosgrove and his new wife – none other than the Charlotte Appleby of the previous book! Barnaby is grappling with the way he cuckolded Marcus with Marcus’s devious first wife, and is unable to forgive himself although his friend is certainly ready to forgive him. But that betrayal means that Barnaby doesn’t think he’s fit for love. He thinks he’s irredeemable. Merry thinks he’s wrong, and sets out to prove it.

Readers of the first book in the series will know what Marcus’s betrayal was, and how he was not entirely to blame. He’s a very hangdog character for a while, though it’s easy to see his more admirable qualities. Fortunately, Merry – Charlotte’s cousin, whose father was a dancing master and her mother a noblewoman – has got plenty of joie de vivre for them both.

An accident while exploring a cave brings all these unhappy events and unresolved guilt to a head. Between Marcus and Charlotte Cosgrove, the sparkling Merry (and her imminent Faerie gift), self-respect, trust and hope are restored, love is declared and happiness ever after is achieved. It’s a charming, snappy, happy read. Just the ticket for #happyjune. 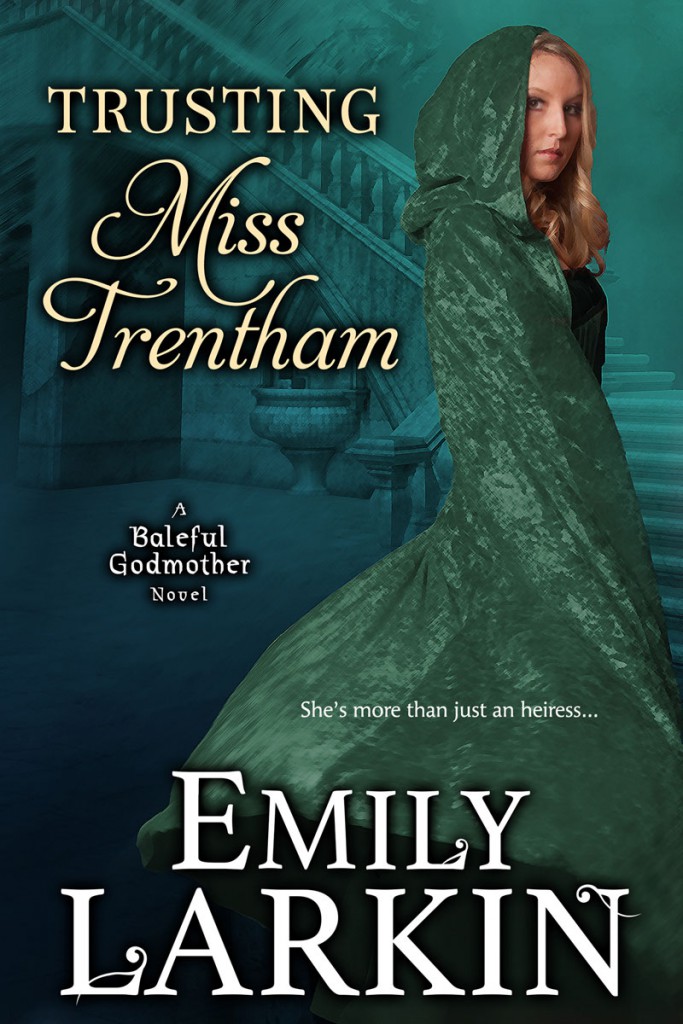 With Trusting Miss Trentham, Larkin goes back to a full length novel to tell the story of Letitia Trentham, a wealthy heiress, still unmarried because she’s turned down every offer of marriage ever made to her. She already has her faerie gift, you see. She can tell truth from lies, and no man has ever wanted to marry her for love. Only for her wealth.

She’s resigned herself to never knowing love when Icarus Reid comes into her life. Reid is a former soldier, traumatised by dreadful events at the Battle of Vimeiro. All he wants from Letty is for her to use her unusual ability to find out who betrayed him and his scouts before the battle – who is responsible for the deaths of his comrades and something worse that happened to him.

Letty finds herself challenged out of her ladylike comfort zone, pretending to be someone she’s not, doing things she never thought a lady would do, to find out who betrayed this troubled man, and perhaps bring an end to his nightmares.

Letty is lovely – a woman who is profoundly tied to the necessities of truth, who finds herself committing little falsehoods in pursuit of helping this emotionally scarred war veteran. She learns about herself and the sometimes too honest Reid, including his darkest secrets. For all that she’s so aware of how much lying people do, she’s kind, spirited and will always stand up for those who need protection. Especially if they’ve been unjustly accused of wrongdoing. She, after all, can tell if they’re innocent.

I loved the way Larkin explored Reid’s experience of PTSD, long before the term was ever applied to traumatised survivors. I also loved the attention she paid to creating Letitia Trentham, who has endured a lifetime of disappointments in men who don’t see her, only the way her wealth can give them ease and repay their debts. Instead of being bitter, Letty is strong and kind. Her determination to find the truth of what happened in France, motivated by compassion, is a nice counterpoint to Reid’s more despairing need to find the truth. His slow recovery is well handled – not too pat. Letty’s connection with and love for him can’t save him, but she can help show the way to safety at last.

I enjoyed the crossovers hinting at events in the next book in the series – Claiming Mister Kemp – so that the series is loosely tied together by more than the theme. We even get to meet Barnaby and Merry Ware again!

There’s grit and pain in Icarus Reid’s story as he confronts people on the trail of the traitor, but there’s also hope and redemption, led by Letty’s kind but not naive heart and mind. 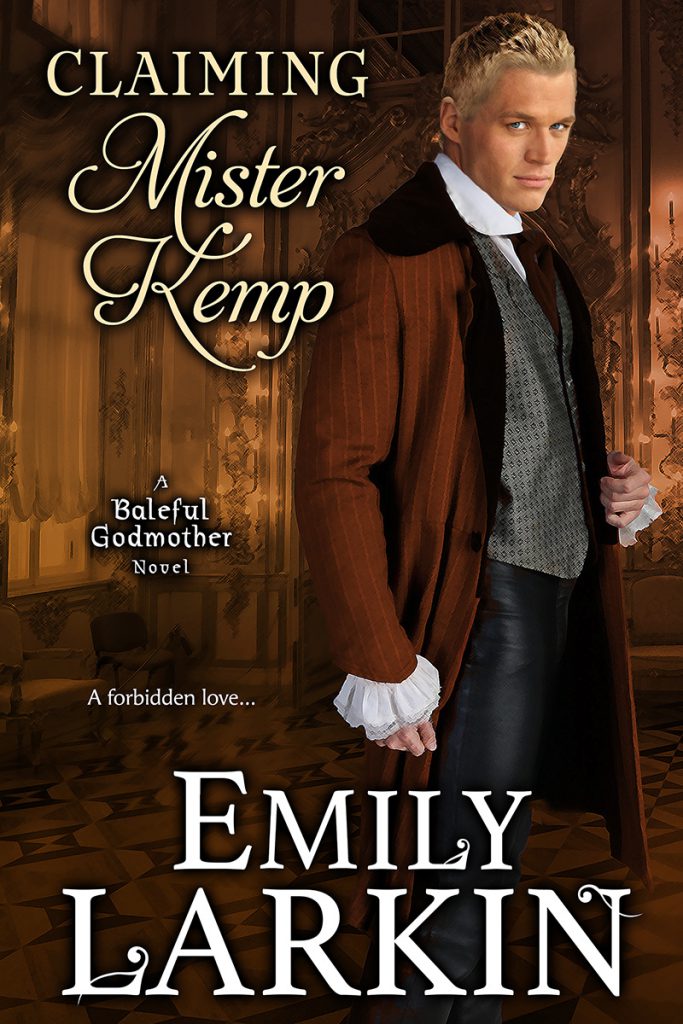 There was so much to love about this novella, but I confess I found it occasionally uncomfortable. Being set in the regency period, attitudes to homosexuality were naturally going to affect the storyline and the way in which Lucas and Tom interacted.

Lucas Kemp’s twin sister has recently died, and he’s still overcome with grief. When his childhood friend Thomas Matlock returns from the war in France in which he came too close to death, Tom’s decides to act on his love for Lucas, which he is certain is reciprocated.

It is, and we know it is from early on, but Lucas is also struggling with shame about his desire for Tom, as well as all the grief he bears from the loss of his beloved sister Julia.

In so many ways this is Larkin’s usual charming, witty love story, with just a touch of the magic that is such a feature of the other stories in the series. The nature of Lucas’s discomfort with his desire, however, means some of the intimate scenes with Tom are what might be tagged ‘dubious consent’. Tom sometimes pushes past Lucas’s “no” and it later becomes a “yes” but I confess a preference for clear consent. Tom promises never to push Lucas beyond what he wants, but he skates very close to and occasionally over that line for my preferences.

But Lucas’s heart is definitely saying yes, even if his brain is throwing up walls, so ultimately, they work themselves out and even find they have the support of family who just want them to be happy.

That unreconciled discomfort I feel is at least counterbalanced with some loving scenes, some wonderful crossover moments with the preceding book, Trusting Miss Trentham, and after trials and anguish the happy ending.

I hope Emily Larkin continues to write love stories for all kinds of people, and I’m very much looking forward to #6 in the series, Discovering Miss Dalrymple.