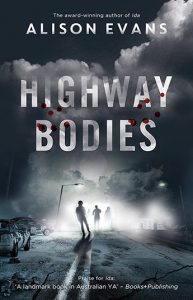 It’s always fabulous to have new zombie fiction set in Australia, and it’s ten times as grand when the zombie fiction in question has as much personality, drama and heart as Alison Evans’ new YA book, Highway Bodies.

The story is divided into three-chapter sections: the first from the point of view of a teen near the epicentre of the zombie outbreak; the second from a  group of young musicians taking a week away in the country to work on songs; the third a pair of non-identical twins whose mother is a nurse at a hospital where the outbreak is getting out of hand.

These young people are diverse and queer. As their stories are told and eventually converge, we learn that the world has always been hostile for them – the twins, for example, bear scars inflicted by a violent father. In trying to survive, each group is aware that other survivors are just as – or even more – dangerous to them than the mindless zombies.

Evans has a deft hand in giving each of the three main narrators their own distinctive voice. A lot of what happens is gruesome as each is confronted with the zombie infestation, mitigated by the humanity of the characters’ responses and fears for the lives of their loved ones.

The story leads to a conclusion that isn’t a safe geographical point so much as a fierce dedication to supporting each other in a world where everything is hostile. It’s a bit like actual life in that way.

For all the gore and violence, Highway Bodies manages to be simultaneously uplifting in the love and protectiveness its protagonists feel for each other. Love for family (both born and made) and friendships are the motivating forces for each of them, and there’s tenderness, loyalty and love at the heart of the end of the world.

As zombie fiction it’s fast-paced and full of the types of zombie encounters we love to read about. As an allegory for growing up queer in an environment that’s hostile to your very existence, it has power beyond the surface story.

Highway Bodies is thematically reminiscent of Mary Borsellino’s fantastic work in Ruby Coral Cornelian, The Devil’s Mixtape, Thrive and others – diverse kids in a hostile world, whose best weapon and best hope is love.

Evans’ second book is a corker, and I can’t wait to read whatever they write next.