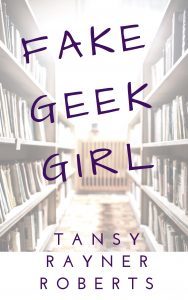 As mentioned in my review of Ruining Miss Wrotham, I’m on a kick of reading only happy books for the month of June, as an antidote to the bleakness of the world and some deeply disturbing and unhappy books I’ve read in the first half of the year.

Along with more of Emily Larkin’s Baleful Godmother series, which I’ll review a bit later, I pounced last weekend on some short fiction by one of my favourite writers, Tansy Rayner Roberts.

Roberts has some fantastically fun short story series going on at present, including the Castle Charming series (Glass Slipper Scandal is the first one of those) and the Belladonna University stories, the first of which is Fake Geek Girl.

The Fake Geek Girl of the story is a rock band, headed by the charismatic Holly, who writes songs inspired by the geeky life of her twin sister Hebe despite the fact Holly doesn’t really get the geek life. The songs are ironic. Possibly. The band’s drummer, Sage, is Hebe’s ex.

They’re all good friends – though cracks are starting to appear as Sage frets that Holly’s about to break up the band to go solo. Fellow bandmember, Juniper, has her own set of issues, Sage and his uni flatmates are looking for a new roomie, Hebe might like a guy she’s met if he’ll stop mistaking her for her sister, and Holly might be hooking up with an awful ex.

The action is set at Belladonna University, which splits its curriclum between the Real (that is, magic studies) and the Unreal (which is mundane stuff like engineering).

The tale unfolds with characteristic energy, sharp wit and cracklingly good characterisation. If it wasn’t enough that I adore the writing, in this book everyone has agency, the narrative boldly tramples over stereotypes and cliche, and it flings a bucketful of glittering fresh narrative confetti everywhere. To put the fruit-and-feather Carmen Miranda bonnet on top of the glory cake, Fake Geek Girl ends with a song lyric that makes want to sing. It speaks to my heart, no lie.

Actually, a while back, as a result of supporting Roberts’ Patreon, I read the second of the Belladonna University stories, Unmagical Boy Story, before I got to this one. It didn’t harm the reading of this book, which contains a reference to the characters who appear in Unmagical Boy Story. I am very thrilled to see, however, that the third Belladonna University story, The Bromancers, is currently being podcast on the Patreon. Soon it shall be released in ebook form and it shall be mine, I tell you, miiiiiiiiiiiiiine.

In conclusion: if you’d like a happy read, for the month of June or at any other time, the Belladonna University series, starting with Fake Geek Girl, is right up there in glitter and song. It’s a positively joyful thing.

By the way, I’m all ears for Happy Reads. If you have any recommendations for books that fit the bill, leave a comment!

Sisters in Crime: How to Get Away with Murder

Covid-willing, I’ll be appearing with a panel of other writers discussing how to get away with murder… Get tickets at https://buff.ly/2UWT2Cg

I will be talking with LJM Owen in an online chat for Readings bookshops. The $5 fee can be taken off the cost of the book when you buy during the event. Read more and book at Readings.