Review: And Fire Came Down by Emma Viskic 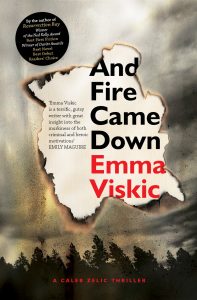 I loved Emma Viskic’s last book, Resurrection Bay, so much, I live-tweeted some of it while reading. I would absolutely have done the same thing while reading its follow-up, And Fire Came Down, except I was offline and on the road for some of it, and was gobbling it up too greedily to wait till Tweetbot was handy.

And Fire Came Down brings us back into the world of Caleb Zelic, who is very much suffering all the psychological and emotional effects of the events of Resurrection Bay. He’s still stubborn about letting people know he’s deaf, his relationship with his wife Kat is still strained, but not half as strained as his relationships with her relatives and indigenous community in Resurrection Bay itself, his brother, Ant, the police and his remaining friends.

In fact, Caleb has strained relations with anyone you’d care to mention. It’s not that he’s a bad person at all, but the aforementioned stubbornness and the uncanny ability to say the wrong thing at the wrong time, combined with nightmares and guilt, make him the King of Poor Decisions.

This terrific crime thriller opens with Caleb jogging – without his hearing aids, as usual – and becoming entangled with a frightened young woman seeking his help. Portia’s plea for assistance ends in assault and death. Caleb is driven to find out who sent her to him, what happened and why – despite everyone advising him not to.

If every relationship under the sun wasn’t strained before, they sure are now.

Just like with the first book, I spent a lot of time squirming in my chair and shouting at Caleb to for the love of god not to do some of the unwise things he does.  I love the guy and I wish he’d let people help him, or take the time to properly think through consequences.  For all his difficulties, he’s a very likeable character. He’s stubborn and sometimes thoughtless, but he’s also smart, courageous and full of sass. He cares very deeply for all these people he struggles to fully connect with.

Viskic manages to keep this fine balance going from start to end – we can empathise with Caleb, we like him, but damn, we wish he’d make some better decisions.

He’s surrounded by fascinating, complex, flawed people too.  Viskic is excellent at giving the reader fully rounded people, whose motivations may be unclear but convey the real and muddy business of being human.

Caleb’s dangerous misadventures attempting to unravel the circumstances of Portia Hirst’s death this time throw him into the path of drug dealers, bikies, Portia’s fractured family, attacks on the indigenous community of Resurrection Bay (many of whom are Kat’s relations) and sundry shady law enforcement types. Caleb’s former partner and friend, the disgraced Frankie – a splendidly real character – makes an appearance and Caleb is too close to violence more than once.

And Fire Came Down has the previous book’s heady mix of love, pride, prejudice, betrayal, tragedy, family fights and loyalties, and a town full of secrets – some of them deadly.  Viskic writes powerfully and with compassion, setting the perfect pace to create a vortex that sucks you right into her world

Resurrection Bay scooped up a bunch of awards. And Fire Came Down meets the expectations raised by this recognition and ups the ante.

Book three is going to be a cracker!

Buy And Fire Came Down