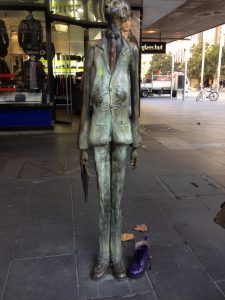 Hello all. I’m already bolting out of the gate in 2018 with a series of projects that promise to keep me chained to the keyboard all year.  Yes, that is the sound of me cheering. I quite like my keyboard.

Besides working hard on the day job, I spent January preparing the re-release of the second book of the Duo Ex Machina series, Sacrifice. My Patreon supporters are getting the re-edited chapters of that book every two weeks, and when completed, they’ll get a thank you copy of the book and it’ll go on general sale.

Now that the individual chapters are scheduled in Patreon, I’ll be working on the third and brand new novella in the Duo Ex Machina series,  Number One Fan.

One of the other things I’m working on  is the expansion of Grounded (a sample of which was posted for Patreon supporters in December).  The things I’m writing into it are slotting in very naturally, and now I wonder why I didn’t include them in the first place.  I hope to have completed these edits by the middle of February and soon after be ready to resubmit to the publisher who asked to see a longer version.

I’ve also devised a cover for the proposed short story collection, Scar Tissue and Other Stories. It will contain some of my (edited) Lost and Found flash fictions and reprints of older stories. I’m also planning a number of brand new stories too – a few more Lost and Founds, and a some other short stories, perhaps set in the universes of Ravenfall and Kitty and Cadaver

Scar Tissue and Other Stories is planned to be a reward for Patreon supporters once I reach my first goal of $100/month. I’m not quite there yet, but if you’d like to help me reach that goal (and access reward copies of books, sneak peeks of works in progress and other exclusive content) that would be grand.

These aren’t my only planned projects for 2018.  Among the others are:

Ambitious, I know. But I’m full of ideas! With fortune and good planning, I might even get all these started (and some even finished) by the end of the year.