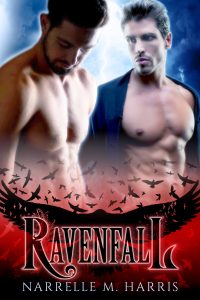 It’s 1st September, and a happy release day to my latest (and eighth) book, Ravenfall, published by Clan Destine Press.

If you have pre-ordered the paperback, today’s the day your retailer will send it to you on black feathery wings!

Set in contemporary London, Ravenfall is the story of James Sharpe, a vampire who wonders if it’s possible to fallin love, since he doesn’t even know if he has a soul, and Gabriel Dare, an artist who’s wondered all his life if he was mad but he’s pretty sure about one thing – James Sharpe is the best thing in his life. Can he convince James of the same?

They’ll find those answers together, provided they survive all the other monsters who have schemes of their own. People are dying, nobody is safe, and even the undead can die. James and Gabriel will have to risk it all in order to be together for as much of forever as they can manage.

Curious, Gabriel stabbed the tip of the silver knife into the jar of garlic, and placed it in the dish of vampire blood. The blood fizzed, coagulated and gave off a terrible stink.

‘Better toss the silverware out too, then,’ he said.

James, who had pushed well back from the table, shook his head. ‘Keep it in your room.’

Gabriel was inclined to argue the point, but James was staring at the dish of blackened vampire blood in fascinated horror.

‘We don’t have to do this now,’ Gabriel offered gently.

‘We have to find out, don’t we? Apart from anything else, you need protection. You may one day need it from me.’

‘I’m an excellent judge of character, remember? If you can’t trust yourself, trust me. I lived with a father who did his best to grind me into the dirt to get back at my mother; a man who medicated me from the ages of eight to twelve and packed me off to psychiatrists and institutions rather than try to listen, let alone understand. I lived on the streets, and I’ve fought for my independence my whole life. I know what people who want to hurt me look and sound like. You’re not like them. You don’t want to hurt me.’

Gabriel’s leaned across the table to kiss James’s mouth. Their lips met, soft and chaste and sweet. James’s skin warmed under Gabriel’s tender touch. He didn’t kiss back, exactly, but with his head tilted up, his whole stance softened, relaxed, held still, and he received the kiss like a benediction. When Gabriel drew away, James’s eyes were closed.

James’s blue eyes opened, and they were full of longing and sorrow and fear. ‘I don’t want to hurt you. That doesn’t mean I won’t without meaning to. It’s happened before. When I first woke like this. A vampire. I didnae know what I was yet. But I was so thirsty and… I did monstrous things, Gabriel.’

‘But you’re not a monster. Trust me on this.’

‘Eight hours ago, you didn’t know that vampires could exist. Now you’re telling the one you live with that you trust him.’

‘You’re daft. But please. Even if you can trust my intent, you can’t trust the thirst. Promise me you’ll defend yourself if I… if I forget myself again.’

The ebook is coming in a month.