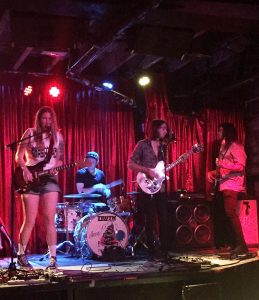 Over on my Patreon, the Duo Ex Machina novella Sacrifice is being released in fortnightly chapters. It’s all scheduled and the cover will be revealed later in March.

In the meantime, I’ve started work on the brand new book in the series.

The next Duo Ex Machina novel, Number One Fan, will be set in Melbourne in 2009, five years after the end of Sacrifice.

One of the things I’ve been looking up is when various music venues began operating. I don’t want to have them popping up in one of those little, intimate music venues doing secret show if that venue wasn’t open yet!

Cherry Bar (pictured, featuring my niece’s band Bronze) is one obvious pick. It’s been around since 2000 and has a great reputation for (and history of) nurturing local talent as well as hosting intimate events for big name acts, after parties and – once – saying no to Lady Gaga rather than oust a local band who’d booked the stage. Wikipedia claims that Noel Gallagher liked the venue so much he offered to buy it in 2002.

The building above it caught on fire in 2008. Cherry Bar only suffered water damage but it took six months to get the wiring fixed. However, it was definitely open and rocking again by 2009.

It’s such a classic Melbourne venue too – down an alleyway called AC/DC Lane. It got that name in 2004, in plenty of time for the setting of this novella, after being burdened with the tedious ‘Corporation Lane’ for most of its named life.

Another possible location for the scene is The Toff in Town, a venue on the second floor of a well-known ‘vertical laneway’, Curtin House on Swanston Street. (Curtin House is also home to Cookie Bar, the Metropolis bookstore, boutique fashion and a rooftop bar that’s a cinema in summer.)

The main bar features railway carriage-style booths, from which you can press a buzzer to summon a waiter for your order of sharing plates and excellent wines. The music venue is on the other side, featuring live music, DJs, album launches and the occasional comedy show. It would be perfect for a soft launch of the proposed joint project, especially is the music is a bit more alternative and distanced from Duo Ex Machina’s pop oeuvre.

The Toff, by the way, is named for the detective in John Creasey’s books from the 1930s-70s. The Toff was the Honourable Richard Rollison, the high-born amateur detective who mingles as easily with the rough types as with the gentry. Since Milo and Frank keep falling into crime plots very much against their will, there’s something very pleasing about using this venue as a location. (The Toff pictures here, by the way, are all publicity photos provided by the venue for my old Melbourne Literary App, which is no longer available.)

I have one more nominee for a 2009 location for a music event, and that’s The Blue Diamond Club. Designed to look like a Manhattan speakeasy but run on the 15th floor of a Queen Street office building, it had a lot of pizzazz and a sense of the theatrical. I actually used it in a scene in Walking Shadows, where various vampires converge, Gary proves not to be completely useless in a fight, and a vampire falls off the balcony. Good times.

The Blue Diamond was created in 2006 by Henry Maas, famous in Melbourne as the owner of the Black Cat cafe in Fitzroy, its companion music venue the Night Cat, and as the lead singer of jazz-funk-salsa band The Bachelors From Prague.

The Blue Diamond had a big blue (fake) diamond on a turning pedestal as you stepped out of the lift, and you always had the feeling that if James Bond wasn’t seducing secrets from Russian spies in one corner, then surely The Saint was insouciantly plotting somewhere to steal a lot of boodle.

Over time the Blue Diamond became less smooth and stylish speakeasy, where you had to be a member to get in (which we were), where everyone dressed up in the groove, and the mood was mellow, to a broader, less distinctive and much less atmospheric venue. I suppose a theatrical demeanour can only make so much money.

I’m at the end of this 2009 music reminiscence and I think I’ve now answered my own question.

Look out for a scene in Number One Fan set at The Toff in Town. Who knows, we might even get an action sequence out of that rooftop bar.