Quintette of Questions: Welton B. Marsland 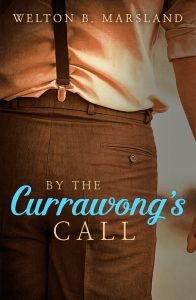 It’s called By the Currawong’s Call, though it didn’t get that title until quite late in its development.

For the longest time, all its bits and pieces had no actual title at all, but they lived in a computer folder called ‘Dinbratten’ – the name of the town in the book.  Then for another long while, it had the working title Ratties (the nickname for the town’s residents).  Briefly, I considered various Biblical references, due to my main character being a priest, and Australian Football references, but nothing really fit well.

Finally, I started throwing around ideas involving various bush birds and settled on the currawong because it’s not only a beautiful bird with a beautiful call, but its name is beautiful, too.  I don’t know if anyone will notice, but the first occurrence of “currawong” in the book is actually made in reference to Jonah Parks (and he certainly does some calling!).

If I could cross early ’70s John Waters (the Australian actor, not the American film director!) with Jensen Ackles when he’s got a beard, I think the result would make a pretty good Jonah Parks.  For Matthew, my Anglican priest, 1939-era Tyrone Power would be just the ticket (have you seen him in that year’s “Jesse James”? Mercy!)

Several spring immediately to mind, but I must go with Agron & Nasir from the TV series Spartacus.  They flew under a lot of the mainstream’s radar, but they were magnificent characters, gifted with a story arc that was so carefully and lovingly woven, shunning practically every stereotype that might’ve got in their way.  Just so satisfying and narratively tight, it’s hard to believe they were “only” secondary characters.

Dan and Pana set the bar so high for two-people-believably-falling-in-love that I’m just completely spoilt for all screen depictions of love stories from here on out.  I could shower accolades all day!

Forever Autumn from the War of the World’s double album never fails to turn the waterworks on.

About By the Currawong’s Call

A small town, a new arrival, and a love that is as undeniable as it is unlawful…

Anglican priest Matthew Ottenshaw receives his first posting in tiny Dinbratten, two days’ ride from his Melbourne home. Determined to honour his calling as best he can, he throws himself into the footy mad, two-pub town, navigating the dusty streets, learning the gossip, and striking up a friendship with Jonah Parks, the resident police sergeant and local bona fide hero.

A police officer and a priest often find themselves needed at the same place, and Jonah and Matthew’s friendship deepens quickly, as they set about their business of protecting the bodies and souls of Dinbratten’s residents. When a bushfire threatens the town, and Matthew’s inexperience with fire endangers the church buildings, Jonah comes to the rescue, and a reckless kiss in the midst of the chaos takes their friendship to forbidden.

Neither Matthew nor Jonah can go back to the way things were before, but continuing their relationship puts everything at risk: their jobs, their friends, even their lives. In the outback town of Dinbratten where everyone knows everything about everyone else, how can they ever expect to keep a secret this explosive?

About Welton B. Marsland 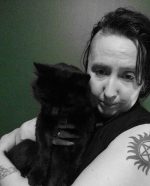 A queer-punk history geek who flits between nature walks, dinky bars, footy matches and live gigs, WBM lives in the great city of Melbourne with an ex-Army sword-slinger and three idiosyncratic cats.

Buy By the Currawong’s Call