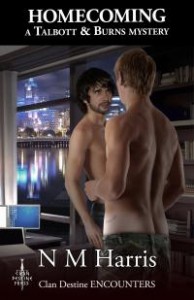 The new story is Homecoming – it’s the first of (so far) three stories about Elliot Talbott and Jack Burns in the Talbott & Burns Mysteries. The title was easy – Jack is coming home after leaving the army, but he and Elliot are also finally coming home to each other, after a decade of each being in love with their best friend and never letting on!

2.     If you could choose anyone from any time period, who would you cast as the leads in your latest book?

I was thinking of a young Hugo Weaving for Elliot and a young Joel Edgerton as Jack when I wrote it. I love how they look in the cover art though.

4.     Who is your favourite fictional couple?

Romantically, it’s Beatrice and Benedick from Much Ado About Nothing. So much sass and so much baggage to work through!

If we’re talking love generally, however you interpret it, it’s Sherlock Holmes and John Watson. I have no problems with an interpretation of their relationship as sexual and romantic love, though I’ve always seen them as epic besties. But whether it’s eros or agape, theirs is a love story of some kind.

Two songs always seem to set me off no matter what. One is Lullaby for a Weary World by Julie Ecklar and the other is Forever Autumn from the Jeff Wayne War of the Worlds soundtrack, sung by Justin Hayward with parts of the story read by Richard Burton. Similarly to Lullaby, it’s related to a story of sorrow about humanity, but it always hits me right in the FEELS when the narrator looks up to see his Carrie on board the little steamer ship trying to escape to sea, to outrun the Martian tripod.  The sense of loss goes from the large – the loss of humanity and the world he knows – to that very specific fear of the loss of the woman he loves, rendering the larger tragedy into the personal, to something we can imagine, and is therefore the more keenly felt.
Lullaby for a Weary World

As Narrelle M Harris, I’m a writer of crime, fantasy, horror and non-fiction. My first book was Fly By Night (2004), containing the novellas Fly By Night and Sacrifice, about Frank and Milo, musicians who are also a couple and get caught up murders. In 2013, my vampire novel Walking Shadows (Clan Destine Press) was nominated for a Chronos Award for SF and fantasy, and shortlisted for the Davitt Awards for crime writing. I’ve also written fantasy, domestic horror and non-fiction.

My other current project is an online novel about a rock band that saves the world from monsters, Kitty and Cadaver.