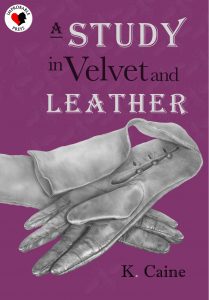 The title is A Study in Velvet and Leather– and surprisingly, this is one of the titles that I agonised over the least! The perfect title, for me, is evocative and visual, preferably has more than one meaning, and fits the style of the piece.

Because I was writing canon-era Sherlock for this work, I wanted a title that would evoke that genre. I was re-reading A Study in Scarlet at the time, trying to sink back into the wonder that is moving in with Sherlock Holmes—so that solidified the first half of the title. From there, it was mostly about picking words that were symbolic of the story.

Velvet and leather are two fabrics that represent the two prominent female characters in the book, so A Study in Velvet and Leather it was!

I didn’t need to think hard about the answers for this one—I already had my reference images downloaded! It’s definitely Tom Hardy for John Watson, with the same quiet feminism that he displayed in Mad Max: Fury Road. He’s got the right build for John, and it’s all too easy to imagine him with the moustache and the period clothing just quietly listening, watching Sherlock and trying to keep up.

And then Tilda Swinton would be my Sherlock Holmes—she’s got the sharp cheekbones, the piercing eyes, and the tendency to menswear that Sherlock shares, and there’s something about the intensity of her presence that’s both really unusual for women, and also very, very fitting for Sherlock as a character.

The gang from Leverage are everything that a team should be—the entire series is a showcase of exactly how good a found family can be, right from the very first episode. Throughout the series, we get to witness a group of different people with different interests—and sometimes, entirely different plans as to how to go about something—figure out how to work with each other instead of against each other, and how to support each other through tough jobs and the stresses and traumas from life having not been that particularly kind.

That’s the kind of thing I look for in my team or couple dynamics—mutual support, snark and wit, and the gradual developing belief that your team is always going to do their best to have your back, no matter what you’re going through, and even if you aren’t your best self at the time.

Hands down, it’s La Dispute’s Woman (reading). The song is evocative of the wistfulness that marks the majority of the book—that sense that you can be physically close to someone (even, dare I say it, roommates) and still feel as though you are continents apart, and the other person is forever out of your reach.

About A Study in Velvet and Leather

Sharing a flat with Sherlock Holmes should not have posed a problem for John Watson–after all, Watson is gay, Holmes is a woman, and the arrangement is financially convenient. But when Holmes takes a complex case involving Irene Adler and a scandalous photograph, she turns to Watson for assistance.

K. Caine is a queer writer from the Canadian prairies whose work encompasses multiple genres, including romance, erotica, horror, and speculative fiction. After having taken a decade-long break from writing entirely, K. Caine is back, and is completely engrossed in creating stories characterized by deep points of view, high emotional stakes, and layered foreshadowing.

Armed with a psychology degree, and more stories about glitter in strange places than are really necessary, K. Caine brings themes of feminism, sexuality, gender, non-traditional relationships, and mental illness into stories. A Study in Velvet and Leather is K. Caine’s first published book.

Caine has wild and varied ideas about what comes next, but is currently procrastinating on Twitter.

Buy A Study in Velvet and Leather