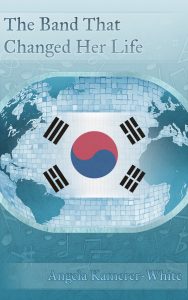 My first book is called The Band That Changed Her Life. It was originally titled 15 Grooms but I felt that was too obvious and didn’t really express the story well enough, since music plays a part in the story.

This time around it wasn’t all that difficult, but then I tend to have the title in my head before the story.

Well, there is no main lead but I would love it if the band Super Junior could play the characters they inspired. A young Elizabeth Taylor or Viviene Leigh would be awesome too, but honestly, if this ever goes to the screen I want to have a multi-ethnic, and racial cast with new and undiscovered talent.

Our ‘Love is Like a Storybook’ story from The Princess Bride

though ‘Sorry Sorry’ by Super Junior was the catalyst that brought this book into existence and ‘Bloodstream’ by Stateless was played on repeat during the writing of it.

About The Band That Changed Her Life

They had risked it all for fame, but what about love?

The largest boyband in Asia collides with 15 American fangirls that change their lives forever.

Love takes courage and gives it right back. Will you take the risk?

My name is Angela Kamerer-White I was born and raised in Southeast Louisiana.

When I was 13 I went to boarding school and made my first Korean friend. In college, where I majored in English, I made friends who were all fans of Kpop. I was introduced to the band Super Junior and the rest, as they say, is history.

I live in Gonzales, LA and work for Walmart. The Band That Changed Her Life is my first book.

Buy The Band That Changed Her Life