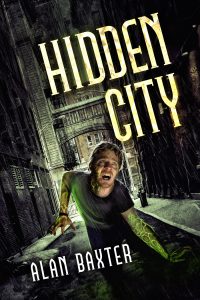 The new novel is called Hidden City. Generally, I hate choosing titles. Every once in a while, a title will drop into place, but that’s very rare. Usually I agonise over them for ages. Thankfully, this was one of those rare occasions when the title was there right from the start and it stuck.

I don’t like to say. People often ask me that question about books, but how I see a character may not be anything like how a reader sees them, and I don’t want to tread on that. There’s some description there in the book, of course, but beyond that I want the reader to build their own mental cast and however they look, that’s fine with me.

Batman and the Joker. I love everything about both characters and how they fuel each other, and how their pasts created them and continue to inform them. I think they’re the two greatest fictional characters ever invented. (Of course, I mean the 80s/90s DC Comics versions, not the Adam West version [though I do love that show] or the modern movies.)

5. What song reflects a theme, character or scene in your book?

Well, this is a dangerous question to ask someone with tastes like mine. There’s a band called Strapping Young Lad, who have disbanded now, but they produced some of the heaviest shit ever and I love them. The lead singer/guitarist, Devin Townsend, is a musical genius, and he still makes amazing music with The Devin Townsend Project. Check them out!

But to answer your question about this particular book, I’m going to say “All Hail The New Flesh” from the Strapping Young Lad album, City. Brace yourselves.

When the city is sick, everyone suffers.

Steven Hines listened to the city and the city spoke. Cleveport told him she was sick. With his unnatural connection to her, that meant Hines was sick too. But when his friend, Detective Abby Jones, comes to him for help investigating a series of deaths with no discernible cause, Hines can’t say no. Then strange fungal growths begin to appear in the streets, affecting anyone who gets too close, turning them into violent lunatics.

As the mayhem escalates and officials start to seal Cleveport off from the rest of the world, Hines knows the trouble has only just begun. 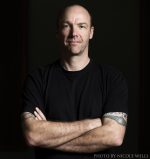 Alan Baxter is a British-Australian author who writes supernatural thrillers and urban horror, rides a motorcycle and loves his dogs. He also teaches Kung Fu. He lives among dairy paddocks on the beautiful south coast of NSW, Australia, with his wife, son, dogs and cat. He’s the multi-award-winning author of several novels and over seventy short stories and novellas. So far.

Read extracts from his novels, a novella and short stories at his website, on Twitter and Facebook, and feel free to tell him what you think. About anything.