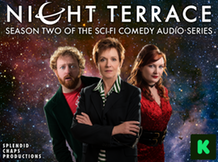 The Splendid Chaps are running a new Kickstarter to fund the creation of the second season of the fabulous Comedy SF adventure, Night Terrace. I’ve already pledged to support it – having loved the first season so much! And here are the Splendid Chaps to talk to us about Love Songs.

The Splendid Chaps team know a lot about sound. They ran the smash hit podcast Splendid Chaps in 2013, and then spun that off into the audio science fiction comedy series Night Terrace, in which Jackie Woodburne (Susan Kennedy, Neighbours) plays a grumpy Doctor-Who-like figure who is annoyed to find her house can travel in time and space.

They know how sound can affect others, but how does it affect them? We asked them to choose their favourite love songs.

I love a lot of love songs – most of the Magnetic Fields’ 69 Love Songs for starters – but I think my favourite is one not connected in my mind to a specific romance. It’s also one I would pick – if pressed – as my favourite song of all. Almost Like Being In Love, specifically the version by Nat King Cole. It’s full of joy, excitement and surprise – it captures exactly the feeling of realising that you’re falling in love.

Whenever I feel happy it’s the song that leaps to mind. Like most people I was introduced to it via Groundhog Day but it stands on it’s own thanks to Nat’s voice, which I love, and the lyrics’ embrace of love in general. In the musical Brigadoon, which first popularised the song, it shows how the magical town makes people feel a strange euphoria when visiting. So really it’s a love song for the big loves: love of life, of people, of the world around you. I can’t get enough of it.

God, this is a tough one, since I’m not currently experiencing romantic love, and any songs that previously had nice gooey sentiments attached have now been ruined.

Except for this one:

Somersault, sung by the beautiful Sia when she was performing with Zero 7. It’s just so gorgeous, the music is happy, calming, uplifting and the lyrics are passionate and grateful. They detail the type of person I would totally fall in love with: someone who’s there for you (and others) no matter what, who’ll witness your life, share the delicious moments and get you through the not so nice ones.

Love Me Do by The Beatles.

Keep it simple: the key to a great love song. Profession of love. Promise of faithfulness. Polite request for reciprocation. No muss, no fuss. And best use of a harmonica this side of Dylan.

Like most They Might Be Giants songs, this one is dense with oddly phrased and oddly specific imagery, but nevertheless this is a song that really captures the giddy rush of falling in love. In the halting rhythm of the verses there’s a sense of disbelief – can this really be happening to me? (“I don’t think anyone’s noticed so I’ll try to act nonchalant”). In the chorus this gives way to slippery-slide guitar and the sheer joy of doing crazy stuff with someone you love.

I was originally going to say the Madness version of It Must Be Love (which I was shocked to discover today was a cover! I had no idea!). But instead I’ll go for one of my other all-time favourite pop songs, and pick Bury Me Deep In Love by The Triffids. Whereas It Must Be Love is about the traditional boy-meets-girl version of love, The Triffids celebrate the version that happens when a rock climber falls off a cliff and dies. No, stay with me.

It’s a song about looking after each other, about the responsibility we share to others – even strangers – through our common humanity. It pleads for us to take care of each other, and hopes we will be taken care of in return. It’s simply beautiful, complete with glorious reverb-drenched late-80s over-production. The band never sounded this slick again (or indeed looked this slick – check out Jill Birt’s hat in the video). But the pleading core of the song is to love each other, and that’s something we can all work harder to do.

Night Terrace is currently crowd-funding a second season. You can find out more – and hear the entire first episode for free – at Kickstarter: Night Terrace