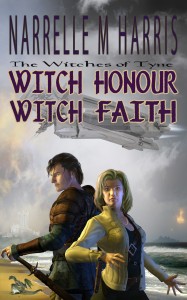 I was very lucky in 2012 to win some gorgeous cover art by the fabulous Les Petersen! But as I already had covers for all my upcoming books, I thought it would a great opportunity to  re-release my George Turner Prize-nominated books, Witch Honour and Witch Faith, in a deluxe digital edition.

Witch Honour began its life as a short story, Witching Ways, and developed into a novel while I lived overseas in Egypt and Poland (in the early 90s). Witch Faith came afterwards. After their short-listing for the George Turner Prize, the books found a home with US publisher, Five Star.

The digital and print books are now both out of print.

What the reviewers said:

“I read Witch Faith in one sitting”. Donna Maree Hanson, The Specusphere

“A mixture of fantasy and science fiction, Witch Faith accomplishes what both genres do best – provide an entertaining stage to view the world from a fresh perspective. Ms. Harris’s well-written story takes you through a gamut of emotions as her witches fall into life-threatening situations… an excellent read.” Robin Lee, Romance Reviews Today.