A new, digital-only edition of The Opposite of Life is coming in 2020. Cover reveal and details in the new year! 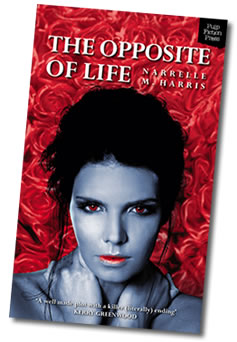 I remember screaming very loudly. In TV shows, that’s where the ad break comes in, while some ninny is screaming her head off. No ad breaks in life, though.

Lissa Wilson has seen more than enough death in her family, so when people start being savagely killed whenever she has a night out in Melbourne with her beautiful new boyfriend, she’s determined to investigate and to make the killing stop. Even when she realises the murders must be the work of a vampire.

Things had been looking up for this librarian and 21st century geekgirl, but the murders make her remember why she prefers books to people. People leave you. People can die.

She finds herself teaming up with the painfully awkward Gary to get to the undead heart of the matter. But there are more challenges in store than Gary’s appalling fashion sense.

The idea of living forever can be a big temptation for someone who has lost so much….

The Opposite of Life is currently out of print

“It’s certainly a most unusual vampire novel. Lissa Wilson, librarian, geek, and youg woman about town,… seems to be the magnet for trouble. … She’s a wonderful character; not because she’s an heroic supergirl, but because she rings true. If you can get this book, do.” – Charlaine Harris, author of the Sookie Stackhouse books. Read Charlaine Harris’ comments.

“I’ve always been a sucker for a good vamp story… The Opposite of Life is about life and death, and love and revenge, and loss and grief, and solving brutal murders. Oh, and dating.” – crime author Lindy Cameron, Stiletto (Sisters in Crime Australia magazine)

“So why is this book so great? For one, Harris’ vampires actually make sense… Also, Lissa is a fun narrator. She has an easy, chatty style that keeps the story moving and mixes humor into all situations… … a quirky, fun vampire novel that isn’t quite like any I’ve read before.” – Fashionista Piranha, Livejournal. Read the whole review here.

“For me, there are three kinds of books: books I don’t like, books I like and books I like so much that I can’t wait to push them on my friends saying, “You HAVE to read this!” The Opposite of Life? Well, that goes in the last category.” – JM, The Book Stacks.

“Narrelle M Harris manages to dodge the cliches of the chick-lit vampire genre with The Opposite of Life… Harris’ novel is completely removed from your standard carbon-copy Buffy book… The study of Melbourne street culture is also an interesting drawcard. For those of you who are tired of rereading your dog eared copies of Twilight or New Moon, pick up a copy of this novel. you won’t be disappointed.” –AD John, Black Magazine Issue #2, September 2008.

“…Harris’ vampires…aren’t just lonely superpowered humans… Coupled with a heroine who doesn’t veer off into badly-thought-out-Buffy-clone when faced with adversity and a particularly rich and engaging urban landscape… there is a lot to like about The Opposite of Life.” – K Tempest Bradley, Fantasy Magazine. Read the whole review here.

“Harris shows a deft descriptive touch and an eye for setting… Melissa has the right combination of fragility and sass to carry the story.” – Jason Nahrung, The Courier-Mail, 9 February 2008. /li>

7 thoughts on “The Opposite of Life”