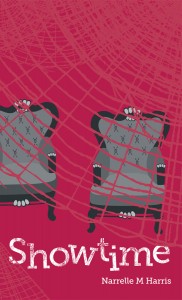 Old family fights can go on forever, especially if you’re undead. If an opportunity came to save someone else’s family, the way you couldn’t save your own, would you take it?

Your family might include ghosts, or zombies, or vampires. Maybe they just have allergies. Nobody’s perfect.

Family history can weigh on the present like a stone.  But the thing about families is, you can’t escape them. Not ever. And mostly, you don’t want to.

It’s a beautiful collection of pieces, each one utterly classic and completely new at the same time… In Narrelle’s hands, everything old is new again, and everything new has the weight of age.  There’s magic in that, and in this book. — Seanan McGuire

The Twelve Planets are twelve boutique collections by some of Australia’s finest short story writers. Varied across genre and style, each collection will offer four short stories and a unique glimpse into worlds fashioned by some of our favourite storytellers.

These Australians give me hope for the future of female, and even feminist, writers in SF. – Gwyenth Jones

Melbourne-based author Narrelle M Harris says: ”I was thrilled when Twelfth Planet Press approached me to contribute to their Twelve Planets series; doubly so when my stories were accepted to appear with so many of Australia’s finest genre writers. I’m always interested in stories where the ordinary becomes extraordinary, and people turn out not to be quite what you thought they were. The Showtime collection was enormously satisfying and fun to write and I hope they strike a chord.”

The collection was released on International Women’s Day, 8 March 2012.

The Writer and the Critic

I joined a line-up of other Twelfth Planet Press writers at Embiggen Books in July 2012 to talk about the acclaimed Twelve Planets series with Ian Mond and TPP publisher Alisa Krasnostein.

This short story from Showtime was first of all a one-act play. This production starred Katherine English as Helen, Stephen Marrable as Robert and Norman Heath as David, with Celia Andrews playing Olivia and directing. The actress who was cast as Olivia had to withdraw at the last moment, and Celia came up with this unusual staging as a way of dealing with the crisis.

The production took place at Harbour Theatre in Fremantle, WA, and was filmed by Yvon Hintz.

Join Narrelle M Harris and Lucy Sussex in conversation about The Only One in the World: A Sherlock Holmes Anthology (Clan Destine Press).

This event is  free but you need to register to attend!